Located in Washington Beach, the police station serves as the respawn point for players who are arrested within the south half of Vice City Beach, being situated in a modern structure fronting delta-shaped plaza, with its parking facilities located at the back. The GTA Vice City Stories rendition features a more detailed rooftop complete with a helipad, as well as a stairway from the rear that leads up to the roof.

In GTA Vice City, the station is unique in that it boasts a set of interiors which can be accessed from the front at any point of the game; the interior consists of a lobby area, a front office, a locker and a shower room, prison cells, and the main office space. However, players who step beyond the boundaries of lobby into other parts of the interior will immediately attain a two-star wanted level and the wrath of the police. Acquiring and wearing a police uniform, available only after completing "Cop Land", allows the player to venture into the inner interiors without alerting the police (so long as the player is not already wanted); however, any act of hostility (inflicting injury on or killing a cop, revving a chainsaw, firing a weapon or simply wreaking havoc) will immediately negate the effects of the disguise and will be followed by the player attaining a two-star wanted level. In GTA Vice City Stories, the station is inaccessible. 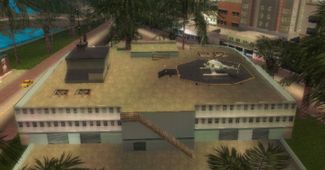 The modified rooftop of the police station in GTA Vice City Stories, as viewed from the rear.

Pickups the player can find in and around the station in GTA Vice City include a Nightstick in the locker room, Grenades at the rear car park (or Tear Gas in the PlayStation 2 version, the only location in the game where it spawns), the aforementioned police uniform in the locker room, and a Hidden Package in the main offices. In GTA Vice City Stories, a Laser Sniper spawns on the rooftop of the station; a red balloon can also be spotted lodged on a palm tree directly in front of the station.

Retrieved from ‘https://www.grandtheftwiki.com/index.php?title=Washington_Beach_Police_Station&oldid=366971’
Categories:
Cookies help us deliver our services. By using our services, you agree to our use of cookies.