Police stations are locations in the Grand Theft Auto series where the protagonist re-spawns after being busted.

The Liberty City Police Department is headquartered in Torrington. The building is unique for having a helipad on its roof. The interiors of any of these stations are not accessible to the player.

The Vice City Police Department is headquartered in Washington Beach. It is the only accessible police station in Vice City. The main entrance allows visitors but within the headquarters are restricted to only police. If the player attempts to go past the main entrance, they will gain a two-star wanted level. However, the player can wear a cop uniform to access the whole interior without being wanted.

In GTA San Andreas, there is a total of seven police stations under the command of the San Andreas Police Department. Three are situated in major cities, while the remaining four are located in rural areas of San Andreas.

The Los Santos Police Headquarters, the Dillimore station, and the Las Venturas Police Headquarters are the only stations accessible to the player. Access to the station is unrestricted, but if the player draws a firearm, they immediately gain a two-star wanted level. Of an interesting note, the Dillimore station is exactly the same as the LSPD headquarters, but with different officers. 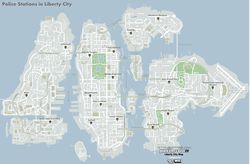 Retrieved from ‘https://www.grandtheftwiki.com/index.php?title=Police_Stations&oldid=366225’
Category:
Cookies help us deliver our services. By using our services, you agree to our use of cookies.