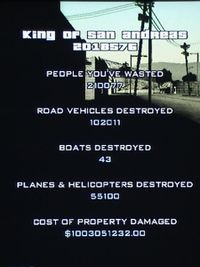 Tips to increase the score

If you wish to increase your criminal rating using other ways, your only solution is to get into a fight with the system and start making a killing spree. Here are a few tips if you want to "start a one-man war".

This method is pretty simple. It consists in choosing a secluded place with narrow access, such as a backstreet, or anywhere far away enough from roads, so you can take out easily any intruder coming in, leaving you with clear shots to aircraft incoming.
Weapons recommended: Minigun, M4, Any shotgun except the sawn-off (in case the intruders come close to you), Satchel Charges (if the shotgun is ineffective).
Escape methods: If you need to get out, I would suggest keeping a fast vehicle (preferably a fast motorbike to get out of your hiding place and rush to the Pay'n'Spray)).
Advantages: Natural defense, and possibility to take out intruders quickly
Drawbacks: It happens often, helicopters blasted down can block your way out, if they don't come blasting right next to you.

Similar to the Homelands Method, except your main advantage is not in narrow access, but in height itself. Take advantage of your opponents by shooting them from a height.
Recommended area: The pueblo reconstitution in Las Barrancas
Weapons recommended: Minigun, M4, grenades or satchel charges to drop on your enemies, sniper rifle (Optional only, but it's a fun and challenging weapon, especially in high wanted level situations)
Escape methods: If you need to get out from a high place, the solution is simple: use a helicopter, the Hydra, a Jetpack, anything that allowed you or helped you to come to your shooting area.
Advantages: Natural defense, possibility to snipe on your intruders quickly as well.
Drawbacks: If you choose an area that's too low, your enemies will have a clear shot at you. On the other hand, if your shooting area is too high, you will have to rely on dropping explosives, or shooting their vehicles.

This method requires you to never stop moving, and to kill all targets from a ground vehicle, using the drive-by method. Weapons recommended: MP5 packed with lots of ammo. Vehicles recommended: Any fast bike, the obvious best being the NRG-500.
Advantages: Mobility is a plus when you have to escape, plus this method allows you to escape whenever needed. Not to mention it allows for music!
Drawbacks: Single weapon without the ability to really aim, not to mention that higher levels will mean law enforcement swarming on the roads, and thus much higher chances to fall off your bike, be it because a cop busted you, or because of an obstacle, leaving your opponents with very clear shot at you.

Similar to Deadly Wind, only that the danger for cops come from the air! Vehicles recommended: Hunter or Hydra, of course. Using a Sea Sparrow is way too dangerous, due to this helicopter's fragility.
Advantages: You have an extremely deadly machine gun at your disposition, not to mention rocket launchers, all with unlimited ammo. Plus, as you're in the air, escaping becomes much easier. Not to mention that if you die, you will be granted with at least 27 points (30 of an aircraft taken down, minus 3 on player's death), although it won't make up for the much higher scores you can attain when you get away.
Drawbacks: At higher wanted levels, enemy Hydras will spawn, and they will shoot rockets to take you down. Plus, if you get too low, there's chances that enemy will open fire on you from the ground, and repeated fire WILL take you down as well. Not to mention there is no way to get a helicopter or Hydra in a Pay'n'spray, so you'll have to land and run to a save point to cash in your points.

Similar in methods and means than Deadly Storm except it requires the Hunter, the Brown Thunder Vigilante Mission, and a high wanted level for the possibility of taking down helicopters.
The method is simple, you mix up vigilantism and killing spree. Killing the criminals in Vigilante mission rewards you with extra health for your helicopter, money, 1 point per criminal killed, and extra time to keep going. Nothing of course stops you from pummeling pedestrians and vehicles on the ground while you chase criminals, it's even recommended if you want to rack extra points.
Advantages: Your helicopter can go as far as being nearly invincible, as your health is refilled by huge chunks each time you complete a vigilante level. It allows you to endure more hits from possible enemy Hydras, making them less of a threat - with a bit of skill you can even take them down!
Drawbacks: As you know already with the Deadly Storm method, a Hunter can't fit in a Pay'n'Spray. When your spree is finished, try to land right near a save point without getting killed.

Considered for a no-cheat, unmodded game, with primary focus on gaining points and losing none.
Nobody stops you from using any cheats if you wish to, but as the game advises, using them might cause trouble to your save game.