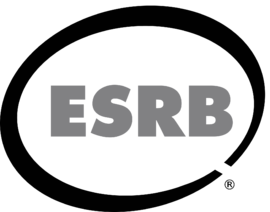 The Entertainment Software Rating Board (ESRB) are a self-regulatory organization that applies and enforces ratings, advertising guidelines, and online privacy principles for computer and video games and other entertainment software in the United States and Canada (officially adopted by individual provinces 2004-2005). It was established in 1994 by the Interactive Digital Software Association. By early 2003, it had rated over 8,000 titles submitted by 350 video game publishers. Many believe that the ESRB may promote media restriction, while others think that it is necessary for software to have content ratings. The decision to found the ESRB was influenced by the graphic "fatality" killing moves of Mortal Kombat and other controversial video games depicting violent or sexual situations at the time, and by pressure from the United States government.

The ESRB applies ratings to games based on their content, similar to the motion picture rating systems used in many countries. Their aim is to aid consumers in determining a game's content and suitability. A game's rating is displayed on its box, the media, in advertisements and on game web sites.

The rating system is voluntary, and companies do not have to submit a game for rating before selling it. However, almost all game publishers in the United States use the system.

The rating has two parts: rating symbols and content descriptors. The rating symbols are usually found on the lower right or the lower left hand corner on the front of the box, they suggest what age group the game is best suited for. The content descriptors are found on the back of the box, usually in the lower left or right hand corner, they describe particular content elements that may be of interest or concern.

The symbols the ESRB uses are stylized depictions of alphabetical letters meant to convey at a glance a game's suitability. Although they were originally white with a black outline (as seen in the K-A rating logo), the rating letters have been displayed as entirely black letters (in order to be more legible) since the later part of 1999. Historic criticism of this ratings system has centered on its vague definitions of age groups and reliance on seemingly arbitrary lettering systems. Below is a table explaining the ESRB ratings system, with descriptions of what each letter represents.

The ESRB have rated GTA games ranging from T (Teen) to AO (Adults only). Grand Theft Auto: San Andreas was famously re-rated following the Hot Coffee incident, where its M rating was removed and changed to AO. A 2nd edition of the game was released shortly after, and the game regained it's M rating.

The GTA series is rated as follows:

Please note that the content descriptors are not always printed as shown below, they may have additional words added to further clarify the highlighted content such as "Mild Blood" and "Mild Suggestive Themes".

The following content descriptors have been updated and are no longer used, but they may appear on games published previously.

Wikipedia has an article on:
Entertainment Software Rating Board
Retrieved from ‘https://www.grandtheftwiki.com/index.php?title=Entertainment_Software_Rating_Board&oldid=411165’
Category:
Cookies help us deliver our services. By using our services, you agree to our use of cookies.