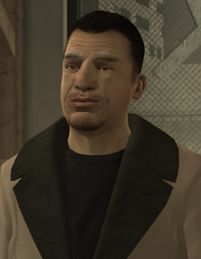 The "Triad 1" in The Ballad of Gay Tony, the latest incarnation of the character.

Triad 1 is a character in The Lost and Damned, and The Ballad of Gay Tony with his own Triad group. It is unknown if his organization is affiliated with the other big organizations - the Jaoming, Lee and Ming families - although an affiliation with the Jaoming Family is most likely as they are known to deal heroin with The Angels of Death as well as the Ming Family which their business deals with renovation.

In 2008, The Triad's cousins had come to Liberty City on the Platypus smuggling a shipment of heroin. At one point the Angels of Death had acquired the heroin from these Triads, which was later stolen in a gang raid by The Lost Brotherhood.

The Triad 1 was about to open a new club, (inside the Dragon Heart Plaza) and Rocco Pelosi assured him that Gay Tony would see that the drinking license for the club was granted. However, when Tony and Luis Lopez meet with the Triad to supposedly grant him the license, it becomes apparent that there was some miscommunication between the two parties, which only serves to anger the Triad 1. He then enters into an argument with the pair which results in him pulling a firearm on Luis and promptly being knocked out. Tony and Luis are then forced to eliminated waves of the Triads henchmen in order to escape from the building. 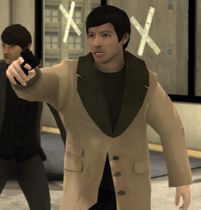 The "Triad 1" in The Lost and Damned, in his earlier form.

At about the same time, The Lost are on their way to the same building in order to sell the Triads back some heroin that they had previously robbed from the Angels of Death. What is unknown to The Lost's Vice President Johnny Klebitz is that President Billy Grey had previously met with the Triad Boss ahead of the meeting to arrange a set up wherein Johnny and Jim Fitzgerald would be killed as they attempted to hand over the drugs. However, all doesn't go according to plan and Johnny and Jim manage to escape after a heated firefight with the Triads. It then becomes apparent that the Triads intention was to simply take back the heroin thus screwing Billy over. It is also possible that the triads beat Billy up as he appears battered outside the Plaza shortly after the handover. This is the last we see of the Triad boss although he is presumably alive as he is not killed in either of his two appearances.