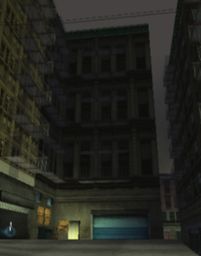 Exterior of the Staunton safehouse, as viewed to the north, in GTA Liberty City Stories.

The Staunton Island safehouse is a safehouse for Toni Cipriani in Grand Theft Auto: Liberty City Stories, located on the northern end of Newport, Staunton Island, directly north of the Newport Multistory Car Park, and the Staunton branches of Pay 'n' Spray and 8-Ball's explosives business.

Acquired after unlocking Staunton Island by completing "Driving Mr. Leone", the safehouse, much like that in Grand Theft Auto III, is based in a large apartment, equipped with a garage at the bottom that can hold up to two cars (although it is possible to squeeze in four). After collecting all the cars for Love Media, a PCJ-600 and a V8 Ghost will spawn at a nearby garage.

The interior of the safehouse is more spacious and luxurious than the Portland Safehouse, but still features the same set of rooms, including a living area (where the save point is located), a dining room/kitchen (where a health pickup is spawned) and a bedroom (where the wardrobe icon is found).

The safehouse is based in design on a pre-existing apartment building in GTA III, implying that the building still stands up as of 2001 (the year GTA III is set in) after events in GTA Liberty City Stories.