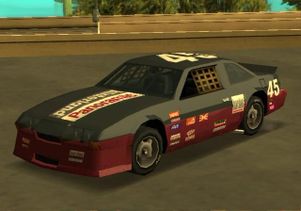 One of three Hotring Racer variants in GTA San Andreas.

There are three variants of the Hotring Racer, however, they all perform exactly the same. They all resemble cars from the late '80s/early '90s, presumably based on NASCAR stock-cars: The first variant (internally named "hotring") vaguely resembles a very generic GM G body, the second (internally named "hotrina") looks like a Chevrolet Lumina and a 1985-1986 Ford Mustang (the front somewhat), the third (internally named "hotrinb") has design aspects from a Chevrolet Monte Carlo (rear side window) and a Buick Regal (front). The "hotring" in GTA Vice City noticeably lacks the roll cages and netting of the "hotrina" and "hotrinb", an inconsistency partially rectified for the GTA San Andreas rendition with the addition of netting.

Under normal circumstances, the "hotring" is the only version of the Hotring Racer available for the player to drive freely in the game world, while the "hotrina" and "hotrinb" are only available via cheats or mods, such as the use of a garage editor or trainers. One exception is present in GTA San Andreas, when the player must drive a "hotrinb" in 8-Track races.

The "hotring" bears only one number in each game: #27 in GTA Vice City and #21 in GTA San Andreas, while the "hotrina" and "hotrinb" have 4 different car numbers each in each game:

Retrieved from ‘https://www.grandtheftwiki.com/index.php?title=Hotring_Racer&oldid=414181’
Categories:
Cookies help us deliver our services. By using our services, you agree to our use of cookies.