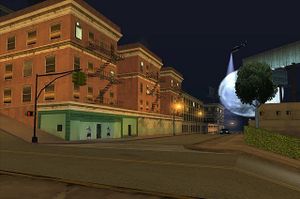 The exterior of Big Smoke's Crack Palace being guarded by two Ballas gangsters shooting at Carl Johnson during End of the Line.

Big Smoke's Crack Palace is the home of Grand Theft Auto: San Andreas character Big Smoke and is used as a crack palace by the Ballas, Los Santos Vagos and the Russian Mafia, and as a front to sell drugs around the city, mostly crack cocaine, hence the name, while their enemies, the Grove Street Families are disbanded, Ganton is owned by the Ballas, Carl taken away by Frank Tenpenny and Eddie Pulaski and Sweet is imprisoned. The power of Big Smoke increases with the drug trade from the Crack Palace to all over Los Santos. The building is located in East Los Santos, Los Santos. Big Smoke moves into the building sometime after Carl Johnson is forced to leave Los Santos. The other front of Big Smoke's drug empire, second to the Crack Palace, is the yay factory in Doherty, San Fierro, destroyed by Carl Johnson in the mission Yay Ka-Boom-Boom. In the mission End of the Line, Carl Johnson enters the building and kills Big Smoke, before Frank Tenpenny destroys part of the building. The building can be accessed after the mission End of the Line. There are also Sprunk vending machines inside the crack palace. The statue that is in the picture, is how Big Smoke was actually going to be depicted as seen in the first trailer of San Andreas.

Retrieved from ‘https://www.grandtheftwiki.com/index.php?title=Big_Smoke%27s_Crack_Palace&oldid=418353’
Category:
Cookies help us deliver our services. By using our services, you agree to our use of cookies.