Frank Tenpenny is a character in the 3D Universe who appears as the central antagonist of Grand Theft Auto: San Andreas. He is the corrupt leader of the Community Resources Against Street Hoodlums division of the Los Santos Police Department. He is voiced by Samuel L. Jackson.

Tenpenny sports a US Marines logo tattooed on one of his arms, which suggests he is a former Marine. During one of his visits to Grove Street to drop on nemesis Carl "CJ" Johnson, he hints that he is married and his wife heavily abuses sherm. However, much later at the end of his cover-up string, he leaves "to get drunk and get laid", and sexual assault is amongst his primary criminal charges towards the culmination of a series of felonies pressed against him. He eventually joined the Los Santos Police Department's C.R.A.S.H. division - in real life, C.R.A.S.H. was formed in 1977 and is unique to Los Angeles.

By 1987, Tenpenny was corrupt and had a shadowy influence over the Grove Street Families, often personally intimidating high-ranking members like Carl and Melvin "Big Smoke" Harris to do his bidding. Tenpenny refers to his work as a game of "percentages", and often purposely strengthening one gang, specifically speaking, the Ballas, so that they keep another from monopolizing the city. Officer Edward "Eddie" Pulaski joined him at an unknown point in time, likely after 1987 because Carl seems less familiar with him. In 1992, fellow Officer Ralph Pendelbury becomes wise to their corruption and first brings evidence against them to internal affairs. At the same time, Officer Jimmy Hernandez joined their C.R.A.S.H. team and was forced to kill Pendelbury on his first day with them.

Tenpenny, alongside Pulaski and Hernandez, is first seen arresting Carl in Ganton, who has just returned to the city for his mother's funeral. The three then drive Carl around the city's poorer neighbourhoods in East Los Santos and hand him the gun that Hernandez had used to kill Pendelbury ten minutes previously, thus giving them leverage over him so they could frame him and use him for redemption. The three then throw him from their moving police car, leaving him in Jefferson, a part of the city held by the Ballas. Tenpenny continues to work with Pulaski and Hernandez, all the while concealing his employment of Smoke and the latter's friend Lance "Ryder" Wilson, who he converted to the Ballas by luring them into an opportunity to gain money and power by selling crack cocaine, a drug which Grove Street Families leader Sean "Sweet" Johnson, Carl's brother, was strictly against.

Tenpenny begins to pay occasional visits to Smoke's house in Idlewood and meets Carl during his exit briefly but later meets him again at Smoke's house where he reminds him he knows 'everything' about him and that he has his eye on him. Smoke, however, brushes these off by saying that Tenpenny won't leave him alone due to his connections with the Grove Street Families and has Carl help him kill Los Santos Vagos gangsters making a deal with the San Fierro Rifa. Carl is later intercepted by Tenpenny, alongside Pulaski and Hernandez, at Ryder's house in Grove Street where he tells them of a train loaded with weapons coming into the city, which Carl and Ryder then attack, taking the weapons.

Tenpenny, after helping Smoke and Ryder, begins to put pressure on Carl to work for him and first uses his leverage to have Carl kill a Los Santos Vagos 'cop-killing' gangster, which he does. Tenpenny, in exchange for Carl helping him with the Vago, gives him the opportunity to disrupt a deal between the Ballas and Russian Mafia, which Carl takes full advantage of. Carl then begins to work again towards the Grove Street Families but is later called by Cesar Vialpando, his sister's boyfriend and the Varrios Los Aztecas leader, with Carl joining him in an alleyway in Verdant Bluffs later that day. Carl then witnesses Tenpenny, Pulaski, Smoke and Ryder unveil the green Sabre used in the drive-by which killed Beverly. Carl then remembers Sweet, who had gone to the Mulholland Intersection for a shoot-out against the Ballas. Sweet is shot during the shooting and the Los Santos Police Department arrests him after officers ambush the area.

Frank Tenpenny and Eddie Pulaski telling Carl Johnson about the DA on Mount Chiliad during The Green Sabre.

Sweet is taken 'upstate' by the police, but Carl, also present at the shooting, is taken by Tenpenny, Pulaski and Hernandez to Angel Pine in Whetstone. They have him kill and then photograph an old police officer being protected by the FBI in a cabin on Mount Chiliad, as he is about to turn states evidence against Tenpenny. Tenpenny then meets Carl again when visiting The Truth, an old friend of Tenpenny's who is selling him marijuana he intends to plant on a District Attorney. Tenpenny tells The Truth that Carl will be paying for the said weed, which is in part done when Carl steals a Combine Harvester from a rival farm.

Carl later moves to San Fierro after winning a run down garage in Doherty. Shortly after arriving he is contacted by Tenpenny who has him go to the Vank Hoff Hotel in Financial to take a DA's car, while working as a valet, to put some of the marijuana he had Carl purchase from The Truth's farm in the trunk.Carl then phones We Tip to inform the unit of the DA, who is threatening to expose Tenpenny and Pulaski. Officers from the San Fierro Police Department then turn up and arrest the DA for possessing the marijuana. Tenpenny and Pulaski then turn up at Carl's garage and have him follow a journalist on his journey to Los Santos where he meets his informant. Carl then kills the two to again protect Tenpenny and Pulaski.

Frank Tenpenny shortly after hitting Jimmy Hernandez with a shovel during High Noon.

Carl continues to enjoy life in San Fierro before moving out into Tierra Robada and Bone County, and then settling into Las Venturas. He is contacted again by Tenpenny and Pulaski from a house in Prickle Pine. Tenpenny informs Carl that despite their best efforts, the 'gig's nearly up'. Tenpenny tells Carl that keeping his badge is not important and that they are the same, trying to get out of the hole, so when someone steps on him he steps on Carl. He then tells Carl to go to Aldea Malvada, a ghost town, to collect a dossier and kill the DEA and FBI agent, which he does. He later meets the two at Las Brujas, another ghost town, where he hands the dossier to Pulaski while Hernandez holds him at gun point.

Tenpenny exits the police car and gets a shovel from the boot before hitting Hernandez over the head. Hernandez falls to the ground and is hit again by a furious Tenpenny as Hernandez had been giving information to internal affairs. Tenpenny, however, is likely to have known about this, since Carl was in San Fierro as he did not mention Hernandez when talking about the DA and journalist, only stating that he and Pulaski were the targets. Tenpenny then hands the shovel to Carl and, thinking that Hernandez was dead, leaves 'to get drunk and get laid'. Tenpenny leaves and Carl digs a grave, although he escapes his intended fate with help from Hernandez, who is shot and killed by Pulaski. Carl then chases Pulaski and kills him, ending C.R.A.S.H. and its men. 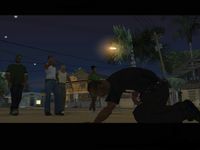 Frank Tenpenny shortly before his death as Carl Johnson, Sweet, Kendl Johnson and Cesar Vialpando during End of the Line.

Tenpenny, shortly after returning to Los Santos, is arrested and put on trial for racketeering, corruption, narcotics and sexual assault. Pulaski, who had been killed by Carl, was also charged in absentia. However, while Sweet is later released on parole, the case against Tenpenny and Pulaski is dismissed by the DA's office due to a lack of evidence. The outcome causes riots across the poorer neighbourhoods of Los Santos, which were hardest hit by Tenpenny and Pulaski's actions. Tenpenny continues with his work in the LSPD despite the riots and begins to recruit young officers into his circle. Carl and Sweet, despite the chaos, continue to re-establish the Grove Street Families and then decide to take on Smoke. Carl breaks into Smoke's drugs manufacturing factory where he confronts and kills Smoke.

Carl, showing remorse for having to kill Smoke, is interrupted by Tenpenny who holds him at gun point. Carl is then forced to fill a briefcase with Smoke's drug money before throwing it back to Tenpenny. Carl, however, distracts him by calling out Sweet's name and Tenpenny quickly turns around, allowing Carl to move before Tenpenny turns back and fires his shotgun. Tenpenny quickly works his way back through the factory but shoots the machinery in the factory with his shotgun, causing them to catch fire, in an attempt to kill Carl. Tenpenny escapes by climbing into the cabin of a firetruck he had previously obtained and drives away. However, Sweet runs after him, jumps from a car and grabs hold of the truck's ladder while Carl escapes the building.

Carl then hops into Smoke's car and begins chasing Tenpenny. After some time, Carl positions his car under Sweet, allowing him to let go and fall into the car. The two then begin to follow Tenpenny and the firetruck through the poorer neighborhoods of the city, killing the pursuing police officers. Tenpenny continues to drive the truck, but when approaching the bridge from East Los Santos to Ganton, loses control and the truck goes off the bridge and lands in Grove Street. Sweet and Carl drive to the scene and are met by Kendl, Cesar and The Truth. The five witness Tenpenny climbing out of the cabin and attempt to call for back up, which due to the riots is not forth coming. Tenpenny tells the five that "fifty of me and this town would be okay" before dying. Carl pulls out a gun and threatens to shoot him, to confirm Tenpenny's death but is stopped by Sweet, saying that the police will not investigate them as Tenpenny died in a traffic accident. According to a West Coast Talk Radio news update, Tenpenny's body is mutilated and stripped by the homeless. His body was discovered by officials after the end of the riots in Los Santos.