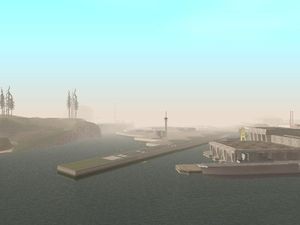 Easter Bay is the bay directly east of San Fierro, San Andreas. It is home to Easter Bay Airport, whose main tarmac extends into the bay, like San Francisco International Airport, its design influence. This bay also contains Easter Basin, which is home to San Fierro's docks and the Easter Basin Naval Station. To the north of Easter Bay is Tierra Robada; to the east is Red County and The Panopticon; and to the south is Flint County. Easter Bay comprises the southeastern portion of the water mass surrounding San Fierro, and is spanned by both Garver Bridge and Kincaid Bridge. The remaining water mass lies to the northwest in San Fierro Bay, which is spanned by the Gant Bridge.

Easter Bay provides a natural geographical and meteorological barrier between the warm, arid desert region of Tierra Robada and the moist, cool area surrounding San Fierro. Occasionally, however, the dust storms from Tierra Robada will cross the bay and influence the weather patterns in San Fierro.

After eliminating the Loco Syndicate in San Fierro, Carl Johnson receives a phone call from a mysterious "friend" claiming knowledge of the whereabouts of Carl's brother Sweet, who was incarcerated indefinitely by C.R.A.S.H. officers Frank Tenpenny and Eddie Pulaski after a shoot-out with the Ballas in Los Santos. Intrigued, Carl heads out to Tierra Robada to find none other than Mike Toreno, the formed head of the Loco Syndicate, who Carl thought he had killed after shooting down his helicopter.

Toreno convinces Carl to do his dirty work, with Sweet's continued safety as collateral for Carl's loyalty. One of the tasks Carl is asked to perform is to steal a Hydra from an aircraft carrier in Easter Basin. Toreno deposits Carl opposite Easter Basin in Red County, near The Panopticon. It is then up to Carl to make his way across Easter Bay and around the main tarmac of Easter Bay Airport in order to reach Easter Basin Naval Station and steal the jet.

Retrieved from ‘https://www.grandtheftwiki.com/index.php?title=Easter_Bay&oldid=362429’
Category:
Cookies help us deliver our services. By using our services, you agree to our use of cookies.