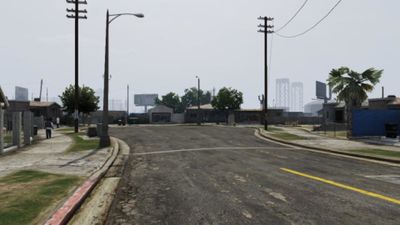 The cul-de-sac of Grove St.

Grove St is a street in Davis, Los Santos with connections to Davis Ave and Brouge Ave. It was once Grove Street Families turf, but by the events of Grand Theft Auto V the street is now under Ballas control with gang members easily visible wearing purple. The Los Santos River also runs parallel to the street. The street has twenty-two houses of which two are for sale and one for rent.

Grove St was under the control of Grove Street Families, a set of The Families until an unknown period of time when the Ballas took control. Franklin Clinton states that the members could be dead, or CEOs by this point in time, referencing the events of Grand Theft Auto San Andreas.

Franklin, Lamar Davis, Trevor Philips and Chop go to Grove St during the mission Hood Safari to purchase some drugs from a Ballas drug dealer. They are then ambushed by Ballas gang members after realizing they were buying dry wall covered in a thin thin layer of cocaine. Franklin, Lamar and Trevor then kill a number of Ballas gang members before escaping via the Los Santos river while Chop runs away, eventually returning to Franklin's home.

Retrieved from ‘https://www.grandtheftwiki.com/index.php?title=Grove_St&oldid=414283’
Category:
Cookies help us deliver our services. By using our services, you agree to our use of cookies.