Exterior of Hercules in The Ballad of Gay Tony. 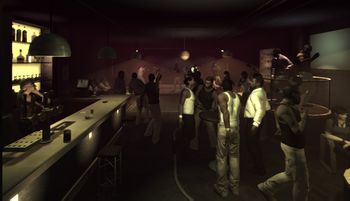 Hercules is a gay club in Liberty City that is mentioned in Grand Theft Auto IV and appearing proper in The Ballad of Gay Tony.

Hercules is located within the northern edge of Westminster, Algonquin, at Galveston Avenue, just beside the Algonquin end of the Booth Tunnel. The actual club does not exist in the main game or The Lost and Damned (both the downloadable content and episodic pack in Grand Theft Auto: Episodes From Liberty City), as the same location is simply a nondescript grilled storefront with a Hinterland logo on a window.

Hercules is one of several Liberty City clubs owned by Anthony Prince, popularly known as "Gay Tony". Bernie Crane also first met his current (and secret) boyfriend Bryce Dawkins during a foam party at the club while high on ecstasy. According to the Liberty Tree and Weazel News, the club has been closed alongside Maisonette 9, following revelations of its club goers taking and selling drugs in the premises.

The club appears in The Ballad of Gay Tony as a proper location where the player, assuming the role of Luis Fernando Lopez, may visit. Compared to Bahama Mamas and Maisonette 9, Hercules is much smaller in size and less elaborate, its interior consisting only of a hallway with a coat room, and a cramped room that serves as a bar, lounge and dancefloor. The player can drink for free from the bar or dance at the club. The club is manned by a doorman named Troy, and its bartender is depicted as a topless, well-toned man who dances around.

Hercules is mentioned in the radio station Integrity 2.0 in The Ballad of Gay Tony and The Lost and Damned only. The station's host Lazlow mistakenly believes that the club is for heterosexuals, with a Greek style.