Exterior of Maisonette 9 in The Ballad of Gay Tony.

Maisonette 9 is a famous "members only nightclub" owned by Gay Tony in Liberty City in Grand Theft Auto IV as well as its episodic titles, The Lost and Damned, and The Ballad of Gay Tony.

The club is located at Galveston Ave in Westminster, Liberty City, accessible via the Hematite LTA J/A station or the Frankfort Avenue LTA K/C station.

GTA IV and The Lost and Damned

The club itself is referenced occasionally in GTA IV, as in the case in "Out of the Closet" when Tom Rivas mentions the club and Hercules, another club owned by Gay Tony. Other characters from GTA IV are also known to have frequented the club, including Gracie Ancelotti (as revealed during "...I'll Take Her"), Alexandra Chilton and Carmen Ortiz (Carmen refers to the club as "Bungalow 9") in dialogues during dates with Niko. The club is later reported by the Libertytreeonline.com to be closed alongside Hercules following allegations of drug pushing in the premises. Although it is mentioned in both in GTA IV and The Lost and Damned, the club is inaccessible until The Ballad of Gay Tony. 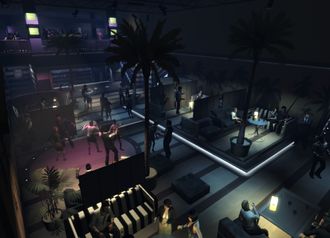 Main interior of Maisonette 9, The Ballad of Gay Tony.

As Luis works in Maisonette 9 as a manager, the player can access the club and interact with its patrons. Luis can dance, compete in a champagne drinking game, drink shots or manage the club. Maisonette 9 also serves as mission destination points. In the near final storyline in The Ballad of Gay Tony, the club is later closed by the city but was re-bought and re-opened by Yusuf Amir in the later storyline.

Retrieved from ‘https://www.grandtheftwiki.com/index.php?title=Maisonette_9&oldid=369535’
Categories:
Cookies help us deliver our services. By using our services, you agree to our use of cookies.