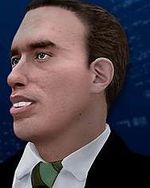 Bryce Dawkins is the Deputy Mayor of Liberty City in Grand Theft Auto IV. He is frequently mentioned in the game and contributes to the plot, but is not seen in person (although billboards feature his face and look-alike pedestrians can be spotted).

Dawkins is a right-wing politician infamous for anti-gay legislation and family values views. He is often criticized for homophobic comments that he makes; one of which suggested a link between homosexuality and terrorism, which he later apologized for saying "Some of my best friends are gay, I just don't want to know about it." Dawkins also endorsed the misogynistic children's toy Gender Role Doll, saying it is a very important tool for suppresing homosexual feelings and supporting family values.

He lives with his wife and children in a Westdyke, Alderney mansion (strange as he is a politician of a different state). He also owns a speedboat, Infernus and Turismo (ironically stolen by Niko Bellic, not knowing who owned it), suggesting he was a wealthy stockbroker prior to his political career. However, it is revealed that Bryce purchased Bernie's condo with city funds and possibly his Infernus as well.

In reality he is a closeted homosexual in a relationship with Bernie Crane, who he first met at a foam party at the Tony Prince-owned gay club Hercules while Bernie was high on ectasy. Bryce is blackmailed at least twice: once by Russian mobster Dimitri Rascalov for control of certain unions, and again by Thomas Stubbs III for an unspecified legislative goal. Bernie recruits the help of his old army friend Niko Bellic to threaten Dimitri away, who was coincidentally a prior mortal enemy of Niko's. After the threat is removed, Bernie rewards Niko with an Infernus, originally a gift from Bryce to Bernie.

At the end of the game, Dawkins' affair is leaked although he insists he is not gay and his gifts to Bernie were only out of charity and platonic friendship. He does, however, admit to personal failures and enters a rehab clinic which is strongly rumored to treat sexual addictions. Although it is not made clear, the possibility is presented that Bryce may have had other boyfriends.

Dawkins is a parody of a long list of Republican gay sex scandals, at least 15 of which are listed here. The most recent incedents at the time the game was developed involved Bob Allen, Larry Craig and Richard Curtis among others. Dawkins may be a member of the ultra-conservative Constitution Party, the largest third-party in the United States, which supports family values, and strongly decry homosexuality.

Dawkins being a resident of Alderney, even though he is an elected official in Liberty City, suggests that he is a carpetbagger.

Retrieved from ‘https://www.grandtheftwiki.com/index.php?title=Bryce_Dawkins&oldid=389671’
Categories:
Cookies help us deliver our services. By using our services, you agree to our use of cookies.