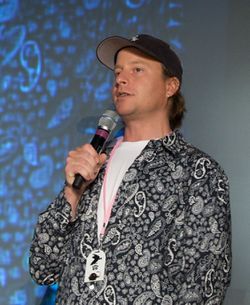 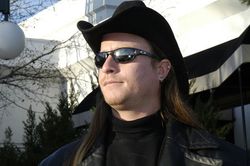 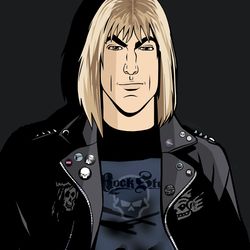 In the 3D Universe, Lazlow's career began in the early 1980s as an intern for the V-Rock radio station in Vice City. He was the sidekick of then-DJ Cousin Ed. Lazlow quickly moved up the radio hierarchy and became the head DJ of VROCK, exhibiting a 'bad boy' attitude and a greatly inflated ego, the latter of which came back to bite him; he was fired from the radio station shortly after the events of Grand Theft Auto: Vice City.

Crossing over to Liberty City in the HD Universe, Lazlow lost his Chatterbox FM job, was divorced by his wife, got arrested for peeing at a Liberty City Swingers game in 2002 and developed a taste for exposing himself to old women on the streets; he was arrested for this in 2005. Deciding to try a return to radio, Lazlow raised enough funds in 2008 to start up a new radio station in Algonquin, named Integrity 2.0. His program on the station involves himself exploring Algonquin and interviewing people on the streets (likely due to him not actually having a physical studio to work from); unfortunately, his interviewing manner is poor, and it seems that his fame has waned — the people on the street whom he interviews show disdain for him, and for radio in general (even "Radio 2.0", as Lazlow calls it). During the show he makes a references to his real-life show, The Lazlow Show. He is always introducing Integrity 2.0 as "The Lazlow Show," also, he makes a comment, "...when sixteen year olds could drink and listen to metal music, you could smoke in bars, and get into high speed accidents..." which is a reference to the intro of The Lazlow Show in late 2006.

In 2013, Lazlow is the host of the show Fame or Shame in Los Santos and, according to the shows website entry (seemingly written by Lazlow himself), was 'recently voted the most handsome man in America by a major online poll' leading to a new a number of film producers wanting to cast him in films. He has also written a book, which is awaiting publication. In the mission Fame or Shame, Michael De Santa and Trevor Philips barge in on the Fame or Shame auditions at the Maze Bank Arena. While Michael's daughter Tracey is performing her audition, Lazlow gets too close to her, causing Michael and Trevor to stop the audition. The two chase Lazlow out of the arena, where he is eventually confronted and humiliated by Trevor at the Los Santos River.

Retrieved from ‘https://www.grandtheftwiki.com/index.php?title=Lazlow_Jones&oldid=417458’
Categories:
Cookies help us deliver our services. By using our services, you agree to our use of cookies.