Cluckin' Bell is most likely based on Taco Bell and KFC. Taco Bell uses a bell logo, KFC serves fried chicken, and both companies are owned by the same parent corporation. KFC has several (untrue) urban legends attributed to it, including serving someone fried rat and growing mutant chickens with multiple sets of body parts. The company has also been the target of animal rights protesters over their use of factory farming and mistreatment of their chickens before slaughter. Its name is also a seeming euphemism of fucking hell, probably inspired by the real-life Cluck-U Chicken. 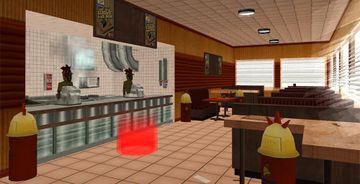 In the GTA III's continuity, Cluckin' Bell was established in 1982. In 1992 (the setting of GTA San Andreas) the company ran two advertisements on local media. The first commercial states that Cluckin' Bell breed chickens with "Six wings, forty breasts" quickly before gassing them. Their stock prices fell when they denied using factory farms, although the song suggests that their stock price has risen again. The second thumbs its nose at protesters and suggests that Cluckin' Bell previously served rats along with the chicken but was no longer doing so. It also implies they use chemicals that result in breast swelling in humans.

In 1994, Cluckin' Bell was taken to court in Ohio, winning the case after no link could be found between Cluckin' Bell meals and mammary gland swelling. The Cluckin' Bell website also says that the company takes no responsibility for erectile dysfunction, hair loss, heart disease, brain shrinkage, obesity, stomach ulcers, blindness or teenage acne. The website also documents how a "recent" case against the company ended after the judge in Mexico City was killed.

In GTA Liberty City Stories, a billboard advertises Cluckin' Bell's "Fowl Wrap" (foul crap), which sells for 99 cents; however, there are no Cluckin' Bell restaurants in-game.

Cluckin' Bell, like other fast food outlets in GTA San Andreas, offer the player four meals, each with different quantities of fats, with one meal, the Salad Meal, lacking any fats. In Las Venturas, the pricing of the Cluckin' Big Meal, Cluckin' Huge Meal and Salad Meal are 20% higher than in the rest of the state, as noted below:

Like other fast food outlets in GTA San Andreas, Cluckin' Bell in present in all major cities in San Andreas. Within rural San Andreas, the chain has only one outlet within town limits, and two outlets at intersections outside towns in Tierra Robada and Bone County.

The drive-thru outlet in Willowfield appears as a central location in the mission Drive-Thru, which is the first hint towards the betrayal of secondary antagonist Melvin "Big Smoke" Harris, and the onlt instance that the drive-thru section is used at any point and location. 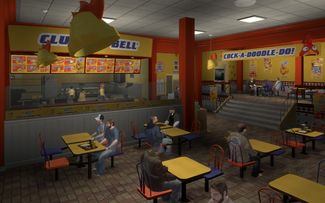 Cluckin' Bell is reintroduced in GTA IV as a place for the player to regain health. However, the player can only buy a $1 chicken burger (dubbed the "Fowl Burger", possibly trying to say the burger is bad, although fowl in this spelling usually means chicken meat), which will restore the player's health in full. Cluckin' Bell also advertises a new non-interactive product, the Stuffed Pollo Todo Frito (literally Fried Chicken Stuffed with Everything), which is a whole deep fried chicken stuffed with mashed potatoes, gravy and corn, a parody of KFC's "Famous Bowl".

In addition, the player in GTA IV can download a Cluckin' Bell theme for their upgraded phone via the website www.vipluxuryringtones.com. Cluckin' Bell is also a favorite eating spot for Little Jacob and Dwayne Forge. Other minor details include certain Benson trucks that feature Cluckin' Bell's signage, as well as an interesting addition of accessible toilets in Cluckin' Bell outlets separated for both men and women (labeled "Cocks" and "Chicks", respectively).

Cluckin' Bell in GTA Chinatown Wars is even less significant, appearing only as a non-interactive and inaccessible part of the cityscape. Occasionally, Yankee trucks in the game may also bear Cluckin' Bell liveries, appearing in yellow and bearing the Cluckin' Bell logo on its sides.

Unlike Cluckin' Bell in GTA San Andreas and its indirect competition in GTA IV, Burger Shot, which operates 10 outlets, Cluckin' Bell's presence in the game is far more limited, with only three outlets throughout Liberty City: in Cerveza Heights, Northwood (closed, though its business sign is still illuminated at night) and The Triangle. Alderney has only one outlet, in Berchem, however, this outlet is closed.

While GTA Chinatown Wars features the same outlets existing at the same locations in Dukes and Algonquin, the Berchem outlet is absent as Alderney is not included in the game's setting.

Cluckin' Bell returns in Grand Theft Auto V, but they are not accessible. There is also a farm in Paleto Bay, named Clucking Bell Farms. Trucks with the company's logo can be seen driving around frequently.

The GTA San Andreas rendition of Cluckin' Bell occasionally has its own theme songs aired as radio advertising. The theme songs were composed to be contradictory, with cheery music but lyrics blatantly pointing out Cluckin' Bell's irresponsible practices. There are two versions of the song, each featuring different lyrics: 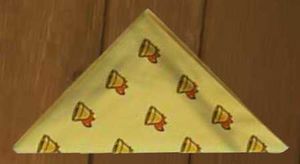 Retrieved from ‘https://www.grandtheftwiki.com/index.php?title=Cluckin%27_Bell&oldid=418050’
Categories:
Cookies help us deliver our services. By using our services, you agree to our use of cookies.