This article is about the manufacturer. For the car of the same name, see Willard.

Willard is an automotive company, first appearing in Grand Theft Auto San Andreas. The nameplate reappears in the HD Universe, where it is based on real-life companies Buick and Mercury. The logo is somewhat shaped like the Hudson Motors logo, the squiggle inside slightly resembling the classic Chrysler winged emblem. Some vehicles in GTA IV can be seen with license plate frames that say "Liberty City Willard," suggesting they were purchased at the city's Willard dealership. 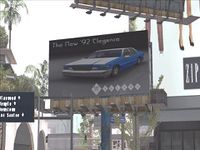 The Elegant is advertised in GTA San Andreas as a Willard model.

Retrieved from ‘https://www.grandtheftwiki.com/index.php?title=Willard_(manufacturer)&oldid=412586’
Categories:
Cookies help us deliver our services. By using our services, you agree to our use of cookies.