The Elegant is one of the many 4 door cars available for use in Grand Theft Auto: San Andreas.

Despite the Elegant's substantial curb weight, a very powerful V8 propels this rear-wheel drive monster quite impressively. Its performance attributes are very similar to those of the Premier, just on a larger frame: engine performance and handling are quite satisfying, although slight understeer is evident. This can, however, be compensated for with the E-brake around corners. Because of the vehicle's mass, it cannot reach quite the same speeds as the Premier, and requires longer stopping distances. This does, however, comes with the compromise of increased durability and better ramming capabilities, and handles well in gunfights.

The Elegant can be modified at a TransFender, but is only offered a bare minimum of modification options: 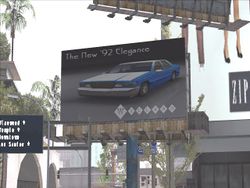 A billboard in Rodeo advertising a "'92 Elegance", hinting one of the car's original names. The car is associated with the Willard name.

Retrieved from ‘https://www.grandtheftwiki.com/index.php?title=Elegant&oldid=374856’
Categories:
Cookies help us deliver our services. By using our services, you agree to our use of cookies.