The Solair is a four-door station wagon featured in Grand Theft Auto: San Andreas and Grand Theft Auto IV. It is similar to the Stratum, but much less appealing, due to a more "family" oriented design and somewhat inferior performance.

The Solair in GTA San Andreas resembles a second generation Ford Taurus station wagon. Despite its unappealing appearance, the Solair possesses above average performance, with good cornering and grip (complemented by soft suspensions), moderately good brakes, good acceleration and top speed, and average endurance. Its suspension configuration, however, may lead to a higher risk of rollovers if the vehicle encounters bumps or uneven terrain when being steered.

The Solair is considered a common car, popping up in traffic at any given time, no matter the location. It has no permanent parking spot.

The Solair in GTA San Andreas can be modified at a TransFender, but is only offered a bare minimum of modification options: 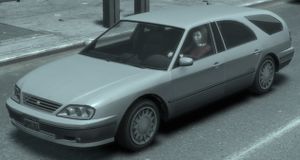 In Grand Theft Auto IV, the Willard Solair resembles a fourth generation Mercury Sable station wagon but the rear side windows aren't rounded and the taillights appear to be inspired from an eighth generation Lincoln Continental, however the general shape is still similar to the Sable; unlike the Sable, however, it has a more modern and luxurious appearance given by the doorhandles, bumpers and miscellaneous chrome. The car also bears "EP2000R" badges on the side.

The Solair is a hefty station wagon, powered by possibly an inline-4 or V6, coupled to a 5 speed gearbox in RWD configuration. Acceleration is mediocre, slightly slower than its competition. Top speed however is slightly higher, thanks to a more torque-y engine: 87 mph (140 km/h). Handling-wise, the Solair retains much of its inspiration's characteristics, being quite sporty for a mid-sized wagon, with good posture in the bends and relatively level cornering.

The suspension is fairly soft, leading to body roll, though very little oversteer can be felt. Crash deformation, thanks to the heavy chassis and frame, is well above average, sustaining much damage before failing; though engine build quality is unimpressive, with it failing after only a few impacts. Overall the Solair is better suited towards ramming and drive-bys than high-speed applications.

In GTA IV, the only pre-set spawn areas for the Solair are:

Retrieved from ‘https://www.grandtheftwiki.com/index.php?title=Solair&oldid=415107’
Categories:
Cookies help us deliver our services. By using our services, you agree to our use of cookies.