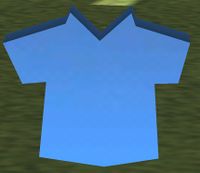 Clothing in Grand Theft Auto: San Andreas has been significantly expanded over its predecessor, allowing the player to extensively customize clothing the player character wears using the wardrobe room, down to accessories. Articles of clothing are categorized by the stores they were purchased from (see #Clothing stores), following by the types of clothing, including:

Clothing has a 4% influence on overall Respect, and 50% on Sex Appeal.

Shooting or aiming a weapon at anyone inside any of these stores will disable purchasing from the shop until you leave.

The range of clothing stores in the game is as follows:

Special clothing are specialized outfits that are awarded to the player via missions and girlfriends, provided in sets that encompass the top, bottom and shoes. While seemingly depicted as independent sets of outfits, the clothes are in fact simply added over the player's normal combination of clothing, as the player's normal top, bottom and shoes are still being worn. The player's watch, hat, necklace and glasses remain visible while wearing a special outfit.

If the player is arrested or killed, the player's special outfit reverts back to their normal clothing after respawning.

Retrieved from ‘https://www.grandtheftwiki.com/index.php?title=Clothing_in_GTA_San_Andreas&oldid=371871’
Categories:
Cookies help us deliver our services. By using our services, you agree to our use of cookies.