Unlocked after completing "Learning to Fly", Victim is a intended to serve as a middle-to-high end clothing retailer specialized in offering the latest fashion, a notch lower from Didier Sachs' luxurious clothing line. Victim's San Andreas operations encompasses three outlets in all three cities in the state, specifically:

Victim is mentioned in passing in Grand Theft Auto IV, where it is stylised as VC TM. The business is described as a "department store" by Peepthatshit.com, while Designerslave.com claims that the store is located in Suffolk, Algonquin, although no Victim or VC TM signage can be found in that area. 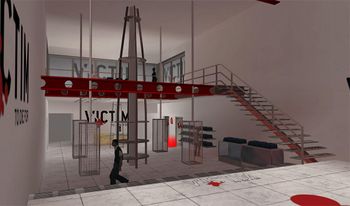 Shared interior for all Victim stores in GTA San Andreas.

Victim primarily offers designer casualwear of middle upper class taste as well as a basic selection of two suits (two black and grey jackets and pants, each with a white collarless undershirt). Appropriately, many of these outfits are priced relatively high at over $200, although basic articles of clothing (like branded T-Shirts and baseball caps) may retail at less than $100.

A biker clothing set (which includes a leather jacket top and two different types of leather-tailored pants) is also available at Victim.

Retrieved from ‘https://www.grandtheftwiki.com/index.php?title=Victim&oldid=365139’
Categories:
Cookies help us deliver our services. By using our services, you agree to our use of cookies.