The process of crushing cars in the games is simple. The player may bring a road vehicle to a designated location near or within the crusher and exit the vehicle, before a crane lifts it and drops it within the crusher, or the compactor moves in. The vehicle is then compacted, and a reward of a certain form is given to the player.

The crusher's function in GTA 2 is two-folds. On one hand, the crushing of any car is certain to award the player money as it explodes when crushed (its amount depends on the score multiplier, as well as the vehicle); on the other hand, having certain vehicles crushed may also award the player with weapons, powerups and benefits. By crushing the Schmidt, for example, the player may be provided with health in the Downtown District, and a machine gun in the Residential District.

While the act of delivering a car for crushing is relatively straightforward, acquisition of the reward is more complicated. After a car is crushed, the crushed remains of the car will be lifted onto a moving conveyor belt that leads into a building; in exchange, the reward will be dispensed out onto a second adjoining conveyor belt and will be made available for only a period of time before it enters another building and becomes unavailable. For this reason, the player must hurry onto the conveyor belt to obtain their prize. Because the conveyor belts are elevated, the player can only gain access to them by way of climbing up a ramp or jumping from a platform of a similar height or higher; such props are usually available for the player to access the second belt and acquire their reward. While on the conveyor belt, the player must also be wary not to end up too far into the second building, or they will be "Wasted" for unknown reasons. 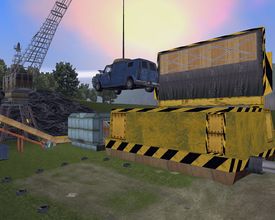 A Rumpo being lifted into the Harwood crusher by a magnetic crane.

The crusher was carried over from its predecessor to GTA III. Located in the Harwood Autocrusher and Junkyard in Portland, Liberty City, the crusher still crushes vehicles the same way, but its usefulness is reduced to simply awarding the player with small quantities of money, and is only prominently used in two missions ("Dead Skunk in the Trunk" and "The Crook") to familiarize the player with the crusher. By GTA Vice City, the crusher is no longer available.

For GTA Advance, the player is required to drive their vehicle under the crusher, exit the vehicle and walk away before the compacter moves in. The amount of money given to the player is also generally greater than the average in GTA III, topping at more than $4,000, depending on the size of the vehicle.

While the GTA Liberty City Stories crusher still functions similarly as the one in GTA III, the player may receive a multiplied amount of money from the crusher by completing specific levels of the "Scrapyard Challenge". If the player completes the Scrapyard Challenge with 21 points, monetary rewards from the crusher will be increased four folds; a score of 31 points further doubles that amount (to achieve a total factor of 8).

Retrieved from ‘https://www.grandtheftwiki.com/index.php?title=Crusher&oldid=373523’
Categories:
Cookies help us deliver our services. By using our services, you agree to our use of cookies.