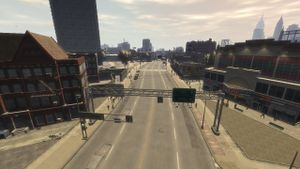 Dukes Boulevard, is the main street in Dukes.

The Boulevard begins at the intersection of Algonquin-Dukes Expressway in Broker, and terminates at the starting/ending point of the Broker-Dukes Expressway.East Island City, is one of the main neighborhoods in Dukes and the centre of the neighbourhood is on Dukes Boulevard, with a Bank of Liberty chain, at Harrison Street, the National Union of Contemporary Arts Building, at San Jacincto Avenue, and the LC24 Tower

Retrieved from ‘https://www.grandtheftwiki.com/index.php?title=Dukes_Boulevard&oldid=330047’
Categories:
Cookies help us deliver our services. By using our services, you agree to our use of cookies.