What a great car. Always wanted one of these.

The Grotti Stinger is a two-door sports car which originally debuted in the original Grand Theft Auto, and has recurred in the form of different designs.

When crushed in GTA 2, the car awards the player an ElectroFingers pickup.

In GTA III and GTA Liberty City Stories, the Stinger appears to be a cross between a Porsche Boxster 986 and a Toyota MR2 Spyder; the Stinger may also appear with or without a roof (a softtop in GTA III and a hardtop in GTA Liberty City Stories). The front end and total shape of the car also resembles the Pontiac Solstice; however, this is coincidental, as the Solstice was not revealed until 2004, 3 years after GTA III's release.

A working name given to the Stinger in GTA III is "Shark" (not to be confused with the Sharks gang), as evidenced in the "official" website for Capital Autos [1].

First manufactured in 1960, the Stinger quickly became a car synonymous with the hard-living Vinewood playboys of the silver screen. Literally hundreds of impressionable young starlets got drunkenly deflowered against their will on the hood of this beauty and then ended up with a face through the windshield. $1 million buys you more than just a used car without power steering - it buys you a piece of history. The interior still reeks of bourbon and cigarettes.

The Stinger, now manufactured by Grotti, has been redesigned as a classic grand tourer instead of a modern convertible sports car. The Stinger's design is mostly based on the Ferrari 250 GT California Spyder with design cues from the Intermeccanica Omega and Italia GT and the Alfa Romeo Tipo 33 Stradale, with the latter for the front. As of the High Life Update, the Stinger can be purchased with or without a roof.

While fashioned as a sports car, the Stinger in GTA 1 has relatively average performance, with average acceleration and top speed (but a slightly fast reverse speed), adequately responsive brakes, and average grip and cornering; the car does, however, have a decent export value of $8,000 if delivered in mint condition at a dock. The Stinger in GTA 2, however, performs substantially better, with good acceleration and a high top speed; however, the car still has average braking and steering, which are not able to handle high speeds, resulting in the Stinger having to perform wider turns when moving fast.

The GTA III/Liberty City Stories rendition of the Stinger is more powerful and faster than most cars, but is one of the lowest-performing sports cars due to having a low tendency to drift and a somewhat-underpowered V12 engine. Its four-wheel-drive configuration gives better grip and mitigates spinouts.

In GTA Vice City and Vice City Stories, the Stinger is among one of the fastest and best handling cars in the game due to its front-wheel-drive drivetrain, something that has been rare in high-performance vehicles, but provides more stability during hard acceleration and turning than rear-wheel-drive cars (especially in rainy weather). This attribute, along with the lack of understeer, makes the Stinger ideal for racing. The only problem with the Stinger is that if the handbrake is abused during turns, oversteer will be present and the Stinger will overswing its rear end.

Legendarymotorsport.net describes the Stinger as having a 3.0 L engine, which turns out to be a V8, and a top speed of 145 mph (233 km/h). While no 0-60 mph (0-100 km/h) time is given, actual gameplay observations show 6.1 seconds, impressive for a car in the "Sports Classic" class. The Stinger's speed and acceleration are on par with sports coupes like the Feltzer; however, oversteer is noticeable at high speeds, owing to its low weight of 1,100 kg (2,425 lbs), and the car may fishtail or even powerslide off the road while turning. The Stinger has an average durability, as it can sustain multiple head-on collisions before shutting down. While having superior acceleration, it has a disappointing braking distance, unlike the JB 700; the Stinger takes a while to come to a full stop.

The Yakuza variant of the GTA III and GTA Liberty City Stories renditions, the Yakuza Stinger, shares the same four-wheel-drive configuration as a regular Stinger, but handles worse and has slower acceleration because it is much heavier than a normal Stinger, at 1,400 kg (3,087 lbs). The Yakuza Stinger is customized in the import tuner style, both of which might imply that the GTA III/Liberty City Stories Stinger is made in Japan. 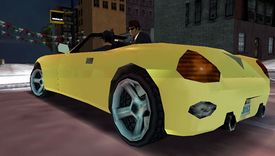 The yellow Stinger in a pre-release screenshot for GTA Liberty City Stories.

Retrieved from ‘https://www.grandtheftwiki.com/index.php?title=Stinger&oldid=415865’
Categories:
Cookies help us deliver our services. By using our services, you agree to our use of cookies.