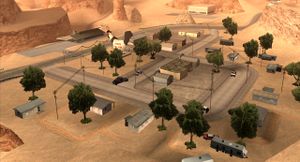 Las Payasadas is a small town located in northern Bone County, San Andreas. Roadside signage of the town indicates an estimated population of 211 in 1992. It is situated only minutes northwest of Verdant Meadows (overlooked by the town), and contains a prominent feature of the surrounding landscape, a large plaster chicken with a constantly bobbing head. When entering the town from west, a sign is visible saying "Las Payasadas, home of "The Big Pecker", The World's Largest Cock" The name Las Payasadas translates roughly from Spanish to horseplay or clowning around, a possible reference to the lack of seriousness afforded to this town owing to its giant chicken. Other than the chicken, the town does not possess any other points of interest.

Depending on player interest, the town may appear in the missions Interdiction, Don Peyote and Misappropriation.

Retrieved from ‘https://www.grandtheftwiki.com/index.php?title=Las_Payasadas&oldid=418236’
Categories:
Cookies help us deliver our services. By using our services, you agree to our use of cookies.