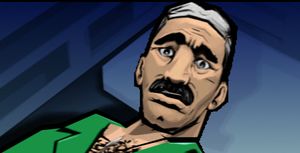 Uri is a character in Grand Theft Auto: Chinatown Wars and an old friend of Zhou Ming. Huang Lee is sent by Zhou Ming to collect Uri, who is to be transported in an ambulance to custody by the police. Huang Lee manages to bring Uri to Zhou Ming, even re-starting his heart after he flatlines on numerous occasions whilst being transported. Upon arrival, Uri is killed by Zhou Ming, who cuts his heart out. Uri had apparently betrayed Zhou which resulted in his death.