For the superhero in GTA IV, see The Brown Streak.

The Brown Streak is a fully interactive passenger train featured in Grand Theft Auto: San Andreas. It is only available in gray (unless with use of the pink or black traffic cheat or with the use of trainers where custom vehicle colours can be set), and runs on the Brown Streak Railroad. In addition to the locomotive itself, the Brown Streak comes with two to four passenger coaches.

The Brown Streak bears a striking physical resemblance to the EMD F40PH. The player can either ride in the train as a passenger (free of charge) by entering through one of the passenger entrances on the rear coaches. The player can also steal the train by entering the locomotive up front, assuming control of the train themselves. When riding as a passenger, the player may de-train at any stop (or during travel, if so desired). When driving the Brown Streak, the player has the option of engaging in cargo delivery missions (after unlocking the entire state), which require reaching each station in San Andreas within certain time limits. Small cash rewards are given for each successful stop, and a large reward is given at the end of the mission (after a complete loop of the state). 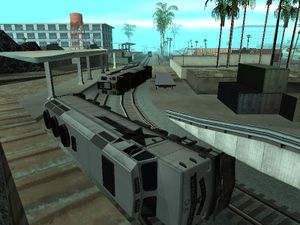 The train has some realistic effects, particularly the ability to derail it at high speeds. The train begins to shake above 47 m/s (~170 kph), at which speed it will derail upon turning (higher speeds are possible while travelling in reverse). If you're already in a turn, the buses start shaking at around 33 m/s. Trains are immune to all forms of damage, including weapon damage, fire and any physical obstruction, however derailment will render them useless.

There are no first/third person views when driving or traveling in the train, and the cinematic view mode is the only view available when the train is travelling outside of the tunnel. Some 3rd-party trainers can offer different viewpoints.

Although not making much appearance during the storyline, it has a prominent use in missions.

Retrieved from ‘https://www.grandtheftwiki.com/index.php?title=Brown_Streak&oldid=416262’
Categories:
Cookies help us deliver our services. By using our services, you agree to our use of cookies.