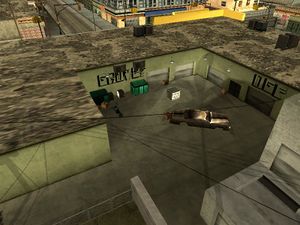 Emmet's is a small gun dealership run by Emmet and located in Willowfield. The store runs in opposition to Ammu-Nation, located across the street, and is frequented by members of the Grove Street Families, in particular the Seville Boulevard Family. Oddly, however, the dealership is located in Ballas territory. Emmet's only sells old weapons, as opposed to Ammu-Nation. During the mission Nines and AKs, protagonist Carl "CJ" Johnson and his friend, secondary antagonist and high-ranking gang member Melvin "Big Smoke" Harris take a shooting practice at Emmet's after meeting Emmet. After the mission, a pistol spawns at Emmet's.

Grove Street Families
Retrieved from ‘https://www.grandtheftwiki.com/index.php?title=Emmet%27s&oldid=418090’
Categories:
Cookies help us deliver our services. By using our services, you agree to our use of cookies.