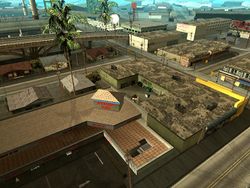 Willowfield is a neighborhood in southeastern Los Santos, San Andreas. It is mainly based on the census-designated place of Willowbrook in Los Angeles County, California, but because of its large industrial character and its location, it might also share some influence from West Compton, California. Located north of Willowfield are the districts of Idlewood, Ganton and East Beach, while to the south are the Los Santos International Airport and Ocean Docks. West of the district is El Corona, while to the east is Playa del Seville

It is a well-known stronghold for the Ballas gang. The history of the area is unknown, although it is possible that the Grove Street Families controlled the area at one point, as Emmet, a Seville Boulevard Family gang member, lives in Willowfield. The area is also very large, and can be described as a low-income district, with poorly-built houses. It also has numerous businesses. It can be also described as an industrial district, as there are many industrial structures and places here, especially southern Willowfield.

During the events Grand Theft Auto: San Andreas, the Rollin Heights Ballas, a subset of the Ballas, use Willowfield as a base from which to attack both Ganton and Playa del Seville, both Grove Street Families territory. Carl Johnson enters Willowfield rarely during the storyline; his sole interaction with the area is his only meeting with Emmet, and later, an illegal arms stock delivery to acquire weapons for the Families. Depending on the player's actions, Willowfield can be captured and claimed as a territory of the Grove Street Families.

Los Santos (3D Universe)
Retrieved from ‘https://www.grandtheftwiki.com/index.php?title=Willowfield&oldid=418462’
Category:
Cookies help us deliver our services. By using our services, you agree to our use of cookies.