Guppy is a character in the 3D Universe who appears as a minor character in Grand Theft Auto: San Andreas. He is the assistant of Dai Dai Lo Wu Zi "Woozie" Mu.

Guppy, at an unknown time, joined the Triads, specifically the Mountain Cloud Boys sub-sect, and rose through the ranks, becoming the assistant to the gang's Dai Dai Lo, Woozie. He and other Triads, help Woozie overcome his blindness, although they do allow him to win at various games and bets. He first meets protagonist Carl "CJ" Johnson at Carl's garage where he identifies local club owner and pimp Jizzy B. and San Fierro Rifa leader "T-Bone" Mendez, although unable to identify the 'leader de mysterio' of the Loco Syndicate.

Guppy meets Carl again when he first goes to the betting shop owned by Woozie, initially not recognising him and then telling him of the boss' 'curse'. He continues to appear alongside Woozie when Carl first meets the gang's Shuk Foo, Ran Fa "Farlie" Li, and again when Carl acts as a decoy to allow Farlie to escape from Woozie's apartment. After Farlie's escape, Guppy phones Carl to tell him of his escape.

Guppy then follows Woozie as he moves to Las Venturas to go over the final preparations for the opening of The Four Dragons Casino. Guppy and some Triads scare off some mob thugs attacking the casinos property, managing to capture one. Guppy tells Woozie, who orders Guppy to 'get rid of him' but Carl tells him to tie the mobster to the hood of a car, which Guppy does, allowing Carl to extract information from him. He then helps Woozie score a hole in one when playing miniature golf inside the casino, moving the cup to help Woozie and then moving the cup to prevent Carl getting a hole in one. He later takes the dynamite that Carl steals from Hunter Quarry.

Guppy later brings two chips into Woozie's office at the casino, with Woozie guessing that one must be fake due to Guppy's tone. Carl later destroys a Sindacco Family plastic factory that made the fake chip, with Guppy meeting to Carl to find out for Woozie how it went. Carl then illegally takes a photograph of the plans to Caligula's Palace and takes the camera to Guppy, telling him to get the film developed. Guppy then receives a package, later identified as a security card reader, from electronics expert Zero and interupts Carl and Woozie while planning their planned casino heist, inadvertantly volunteering himself for the heist, although he is later shown to care more about the whereabouts of coffee and donuts than the actual plan.

Carl, after telling two eavesdroppers to 'fuck off', gains the attention and concentration of Guppy who later assists him in stealing police motorcycles by driving a car-carrying vehicle along the Julius Thruway to allow Carl to quickly leave the motorcycles and continue stealing more police motorcycles. Guppy later tells Carl of the 'sky cranes after they were described by Zero but refuses to fly them, resulting in Carl stealing the sky crane from a military site and stealing an armored van on his own. Guppy goes to Carl's abandoned airstrip to paint the armored van and tells Carl that Woozie could be anywhere after insisting on driving himself.

Guppy then takes part in the casino heist, following Woozie and Carl throughout the casinos lower levels and in taking the money, escaping in the armored van convoy from the casino's loading bay. Later, he joins Carl and a number of Triads in taking back rapper Madd Dogg's mansion from a Los Santos Vagos drug dealer. During this mission, Guppy can be killed by the Los Santos Vagos gangsters, although it is also possible for him to survive. 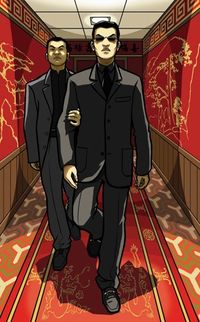 Retrieved from ‘https://www.grandtheftwiki.com/index.php?title=Guppy&oldid=418642’
Categories:
Cookies help us deliver our services. By using our services, you agree to our use of cookies.