Jazz Nation Radio 108.5 is a classic jazz radio station that appears in Grand Theft Auto IV and is hosted by jazz musician Roy Haynes. Both JNR and Fusion FM are among the first jazz radio stations to appear in a Grand Theft Auto game. In Episodes from Liberty City, JNR, Fusion FM and The Journey are replaced with one station, Self-Actualization FM. 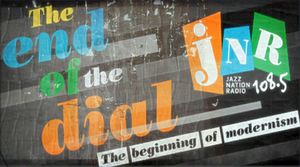