Bomb shops refer to specialized garages in the Grand Theft Auto series that outfit the vehicle the player is in with a car bomb. The feature was first introduced in first Grand Theft Auto, and has remained a relatively common facet of the series.

Note that this article primarily centers around bomb shops as locales. For specific discussions about car bomb mechanics, see the car bomb article.

In Grand Theft Auto, bomb shops are designed as either as garages built into buildings or drive-in garages that feature two entrances on both sides. To use a bomb shop, players simply need to drive their road vehicle into any of the garages and must have sufficient money to install a car bomb. Car bombs in GTA 1 have a timed delay where it detonates five seconds after they are primed by the player while they are inside the vehicle.

Each of the three cities in Grand Theft Auto feature a number of bomb shops, with each of the chain of the bomb shops varying in appearance between cities:

Bomb shops in the GTA London expansion packs are nearly identical in function, but are depicted with overhead signage displaying a classic Cartoon Bomb, and cost only a tenth the amount of money to use compared to bomb shops in GTA 1. Five bomb shops are scattered around London in:

"Red Army Surplus" (left) among a group of other garages in GTA 2.

Bomb shops in Grand Theft Auto 2 take the form of "Red Army Surplus" garages integrated into all garage complexes in each of Anywhere City's three districts. Much like in other garages in the complex, the spray shops are drive-thru facilities that can be entered from either side. Each use of the garage costs $5,000, and the installed car bomb functions identically to those in GTA 1 and GTA London.

For a list of locations for Red Army Surplus, refer to the "Garages in GTA 2" article. 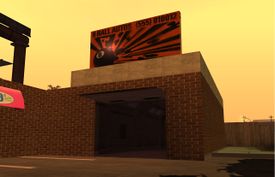 Each installation of a car bomb initially costs $1,000 in GTA III, but was reduced to only $500 between GTA Vice City and GTA Vice City Stories, except for GTA Advance, which retains GTA III's pricing.

Grand Theft Auto: Chinatown Wars marked a return of the bomb shop after an absense in Grand Theft Auto IV (owing to the game offering car bombs through phone calls rather than bomb shops). Introduced in "Operation Northwood", only one "Bomb Garage" situated in North Holland, Algonquin in Liberty City is available to the player.

Unlike previous appearances, the Bomb Garage also requires the player manually install the bomb themselves after driving any road vehicle into the garage; the player will be required to visually interact to attach the bomb to the engine, wire the bomb to both the battery and starter motor, and arm the bomb. Each bomb costs $500, as in previous iterations.

Retrieved from ‘https://www.grandtheftwiki.com/index.php?title=Bomb_Shop&oldid=369151’
Categories:
Cookies help us deliver our services. By using our services, you agree to our use of cookies.