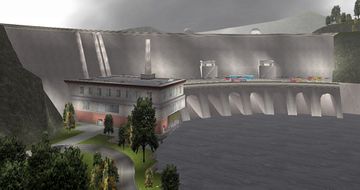 The dam is one of Shoreside Vale's most recognizable landmarks. A road runs along the top of the dam, linking the two halves of Shoreside Vale, two intake towers are connected to the top of the dam via walkways, and the lower section of the dam includes the generator building and several shipping containers. The lower section is accessible via a one-land track. An M-16 spawns at the dam's helipad. A Shotgun spawns somewhere near the generator building.

In Grand Theft Auto III, the dam features prominently in the final story mission The Exchange, in which the protagonist, Claude, kills dozens of Colombian Cartel gang members and their leader Catalina in a showdown on the lower level of the dam.

The Cochrane Dam desing is similar to the New Croton Dam in Westchester, New York as other dams, but their main based is Bayonne, New Jersey.

Retrieved from ‘https://www.grandtheftwiki.com/index.php?title=Cochrane_Dam&oldid=376197’
Categories:
Cookies help us deliver our services. By using our services, you agree to our use of cookies.