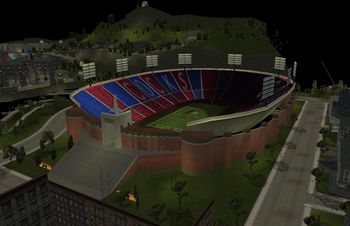 View of Aspatria in GTA III with the Liberty Memorial Coliseum.

Aspatria is the northwestern most district in Staunton Island, being a coastal district with a scenic shoreside path along its western and northern edges. The incorporates a mixture of conventional commercial and residential buildings, as well as recreational locales, such as the aforementioned shoreside parkway and, most prominently, a stadium, Liberty Memorial Coliseum, home to the Liberty City Cocks and the Liberty City Beavers. The commercial and residential buildings, as well as the Coliseum's carpark, are situated to the south, while the stadium occupies much of the district towards the north. 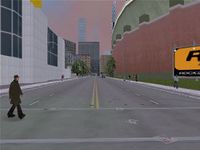 East side of Aspatria in GTA III.

Aspatria is the main base of the Upper West Side neighborhoods, such as Morningside Heights or Hudson Heights for example, As there are also some important sites of Upper West Side that appear in Aspatria, as is the equivalent of Riverside Park called Aspatria Waterfront Park a park along its coastline. Aside Liberty Memorial Coliseum and the coastal path, Aspatria does not boast any other prominent landmark.

While the district shows no sign of regular gang activity, Aspatria also houses a compound which was owned by the Yakuza in GTA Liberty City Stories and the Colombian Cartel in GTA III. In 1998, Toni Cipriani enters the compound in order to steal a Rhino. In 2001, Claude enters the compound to rescue the Old Oriental Gentleman from the Cartel. In both cases, the player must obtain a car associated with the relevant gang in order to enter the compound for the mission (Yakuza Stinger and Cartel Cruiser respectively). The compound can be entered outside of the two missions, but interestingly a Cartel Cruiser is required to enter the compound in GTA Liberty City Stories, despite the fact that it is controlled by the Yakuza at that time.

Retrieved from ‘https://www.grandtheftwiki.com/index.php?title=Aspatria&oldid=328809’
Category:
Cookies help us deliver our services. By using our services, you agree to our use of cookies.