The Automatic Shotgun (AA12) is an assault shotgun featured in The Ballad of Gay Tony.

Based on the AA-12, the Automatic Shotgun is available in two forms: its more conventional form functions like a regular shotgun that fires buckshot, while the second, more devastating form, known as the Explosive Shotgun, is capable of firing "Frag-12" explosive rounds that can inflict heavy damage on vehicles and can kill an enemy in one shot up close or strike an enemy down from a distance. It takes two to three explosive rounds to ignite the fuel tank on a normal vehicle while five to six rounds are required to takedown an Annihilator at low altitude.

Differences should also be noted in their ammunition capacities, while both variants are capable of holding 20 standard or explosive shells per magazine, the Automatic Shotgun can only hold 230 regular shells in reserve, while the explosive variant can hold up to 580 rounds in reserve. In terms of rate-of-fire, both variants fare identically, although both variants do not fire fully automatic like its real world counterpart, or the Assault Shotgun. Rather, they behave like a semi-automatic in a similar fashion to the Combat Shotgun in GTA IV. Strangely, if the player fires the Explosive Shotgun while falling or being burned, it fires much faster, comparable to the Assault Shotgun. However, the Automatic Shotgun (standard shell variant) fires much slower than normal. 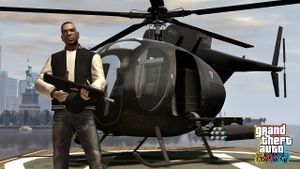 Luis wielding an Automatic Shotgun aside a Buzzard.

Retrieved from ‘https://www.grandtheftwiki.com/index.php?title=Automatic_Shotgun&oldid=369232’
Categories:
Cookies help us deliver our services. By using our services, you agree to our use of cookies.