The M249 is a light machine gun featured in Grand Theft Auto: Vice City Stories (where it replaces the M60 from GTA Vice City), The Ballad of Gay Tony, and GTA V. It is based on the real life M249 SAW. 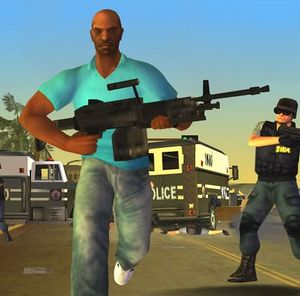 The Ballad Of Gay Tony

The M249 in The Ballad of Gay Tony (referred to as the Advanced MG) is the first hand-held machine gun to be featured in the HD Universe. The weapon is placed in the Assault Rifle slot, unlike in GTA Vice City Stories where the M249 would occupy the Heavy Weapons slot.

The Advanced MG has a high rate of fire, making it well suited for engaging multiple enemies; however, it has less stopping power than the Assault and Carbine Rifles and is less accurate due to the weapon being fired from the hip rather than the shoulder, making headshots more difficult. The weapon's belt-fed design is a double-edged sword; it has a 200-round capacity but takes longer to reload. Against vehicles, the Advanced MG requires sustained fire to the engine or fuel tank to destroy it, unlike machine guns from previous games, which can destroy vehicles in just a few rounds, regardless of where the shots actually land on the vehicle.

It is first given to Luis in the mission Going Deep for Ray Bulgarin. Additionally, law enforcement use the Advanced MG instead of the Carbine Rifle when firing upon the player from a helicopter.

The M249 in GTA V, called the "Combat MG" in-game, is a hybrid design featuring the buttstock assembly of the M60 and the railed handguard of the MK46 Mod 0, a shorter and lighter version of the M249 designed for US Special Operations Forces. Weapon mods include an extended magazine (increasing ammunition capacity from 100 to 200 rounds), an angled foregrip (Magpul AFG2) that gives added stability and a slight increase in accuracy, a scope (ELCAN SpecterDR), and various color tints.

Retrieved from ‘https://www.grandtheftwiki.com/index.php?title=M249&oldid=417479’
Categories:
Cookies help us deliver our services. By using our services, you agree to our use of cookies.