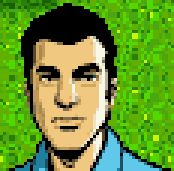 Did you mean the bartender Jonnie who gives Mike missions in GTA Advance?

Jonnie is a fictional character in Grand Theft Auto Advance. Jonnie is a film character being played by Biff Rock and the husband of Mary. Biff struggles to get into character, in particular due to the appearance of Mike, who disrupts the filming. The player can choose to kill Biff or simply take his alligator shoes.