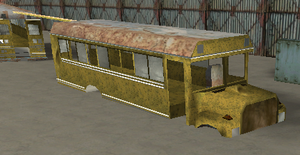 A wrecked school bus during the Kickstart side mission in Grand Theft Auto: San Andreas.

Wrecks refer to beaters (run down versions of cars that still drive with less performance), or burnt out cars found around the maps of all the games.

Wrecks have been featured in certain forms beginning GTA III, where scrapped cars and school buses of unknown origins are scattered in various junkyards; GTA III's scrapped vehicle are also featured in GTA Vice City and GTA San Andreas, although such wrecks may also be sighted in a wider range of locations. The first known drivable vehicle to appear as a wrecked prop is the Walton in GTA San Andreas, where a rusting Walton is present in rural San Andreas. GTA IV would later see the vast majority of wrecks based on existing vehicles in the game.

The GTA series has not traditionally featured working cars in dilapidated form until GTA San Andreas. Earlier signs of such vehicles are primarily present in GTA III's Hoods Rumpo XL and GTA Vice City's Gang Burrito (variants of the Rumpo and Burrito, respectively). Both vehicles, which are essentially variants of commercial vehicles, feature multicolored body panels and paint jobs, as well as graffiti on their sides, but they are both superior in performance over the vehicles they are based on.

GTA San Andreas was the first game to evidently feature standard cars in run down appearances. The Clover and Tampa appear with mismatched body paneling, the Tampa itself depicting a lopsided license plates. In addition, damaged variants of the Glendale and Sadler are scattered throughout rural San Andreas, with their body panels dented and irrepairable. GTA San Andreas' approach to the depiction of dilapidated vehicles was further refined in GTA IV, where up to four cars are designed with normal and dilapidated appearances.

This section links to all articles about cars that have beater versions. These cars are old and rusted, but still drivable, besides some performance issues. In San Andreas, these are actually separate vehicles to their usual counterparts in the game's code, explaining why they cannot be repaired or modified. Many of them have worn paint jobs, missing body parts and frequently backfire when driving. The police will sometimes refer to a beater variant of a vehicle as a "Jalopy" over their radio.

This section links to all articles about cars that can be found burnt out or rusting in various locations.

Retrieved from ‘https://www.grandtheftwiki.com/index.php?title=Wrecks&oldid=368490’
Category:
Cookies help us deliver our services. By using our services, you agree to our use of cookies.