The Burrito is widely considered to be the best van in the GTA III generation of game, with moderately good speed and acceleration, stable handling and steering, and moderate braking and endurance. It has room for four people, with two sitting in the rear.

The Burrito is reintroduced in GTA IV in a redesigned form, bearing a Declasse brand. It resembles a 1996-2002 Chevrolet Express from the front, with a significantly altered grille design; the sides are primarily derived from the third-generation Chevrolet Van (the creases on the sides have been wrongly interpreted as seams), with some of the more modern styling of the Express; the rear is also derived from the third-generation Chevrolet Van, apart from the taillights, which resemble those of the Dodge Ram Van. The standard Burrito no longer features the sporty accessories; in GTA IV, these are seen only on the Gang Burrito. Companies which use the Burrito include T. Watt and Sons Electricians, Spin on This Laundromat, LIB EL and Pharte Gas.

The GTA IV Burrito has degraded performance; it is not as fast as previous renditions, and, although its extra mass allows it to withstand more damage, this gives it poor acceleration. Nonetheless, the Burrito is the fastest vehicle in the "van" class, reaching a top speed of 84 mph (135 km/h).

The Burrito in GTA Chinatown Wars appears to be based to an extent on Burrito in GTA IV, with a utilitarian appearance and a similarly poor performance. However, the van lacks a roof rack, and its color scheme appear more diverse, with some featuring company liveries encompassing the entire body of the vehicle, including FlyUS, Sprunk, Eris, Burger Shot and Ranch.

A Burrito can be seen in the first trailer for GTA V. It looks similar to the GTA IV rendition, but has undergone minor changes to give it a more modern appearance - for example, the rear headlights have been completely redesigned.

GTA Vice City and The Lost and Damned

The Burrito is adopted as a gang vehicle in both GTA Vice City and The Lost and Damned. Known as the Gang Burrito, the variant features additional modifications, including unique accessories and custom paintjobs. The TLAD Gang Burrito also reintroduces certain sporty accessories omitted during the development of the Burrito in GTA IV.

The Burrito in GTA Chinatown Wars may also appear in the form of gang-owned drug vans, known simply as "Burritos", which appear on the streets of respectable gang territories (except the Triads) upon completion of "Carpe Dime". Four types of the vans may also appear during "Excess Delivery" submissions.

The gang Burritos are closely associated with the Drug Dealing side quest in the game, being used as transport to smuggle drugs hidden in cubby-holes on the door; after "Carpe Dime", players may steal one from the streets, drive a to a secluded safehouse, and check for drugs, before they are finally allowed to store the van in a garage. The vans are actually similar in performance to a conventional Burrito, but appear with unique gang colors and accessories, similar to those seen on their other gang cars; the Midtown Gang's Burrito is the only Burrito which is smaller than other forms of Burritos. There is also a pink-and-white Algonquin Triads variant of the Burrito, but the van is unavailable normally, and must be spawned using a garage editor.

Of interesting note is the The Angels of Death's Burrito: if the player manages to hijack one, then enters and exits a lottery shop, the Burrito will be renamed as "Angel", and the red pointer over the van (meant to instruct the player to enter the van) will vanish. 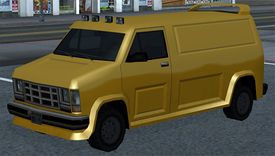 A Burrito with a unique yellow paintjob can be acquired in GTA San Andreas mission in "Mike Toreno". To obtain it, the player must start the mission and get to the point where Toreno is saved and the vehicle needs to be destroyed. Toreno and T-Bone will shoot at the van, but it won't take damage from their bullets, allowing the player time to acquire a Tow Truck or a Tractor. Once the player obtains one, they can kill T-Bone or Mike, failing the mission, and leaving the vehicle free to be towed to the nearest garage.

A special model of the Burrito in GTA IV, dubbed the Laundromat, is used by the Laundromat owner who attempts to escape from Niko in Vlad's mission Hung Out to Dry. It seems that it was not intended to be driven by the player; nonetheless, if the player goes around the back of the Laundromat during the mission, it can be stolen and saved at a safehouse. It is merely a Burrito without the standard roof rack, and with "Monthly Cycle Laundromat" markings.

In GTA Chinatown Wars, players may acquire a unique brown and yellow Burrito from Marcy, a random character encountered in the game, by having her killed in one of her missions.

Retrieved from ‘https://www.grandtheftwiki.com/index.php?title=Burrito&oldid=412096’
Categories:
Cookies help us deliver our services. By using our services, you agree to our use of cookies.