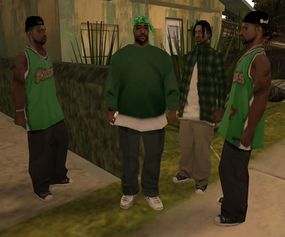 Grove Street Families gangsters in GTA San Andreas, who can be used as backup.

The Backup feature was first introduced in Grand Theft Auto: Vice City, but to a minor extent. The player can only gain backup after achieveing 100% completion of GTA Vice City. Once the player achieves 100% completion of the game, three Vercetti Gang members will spawn in the TV room of the Vercetti Estate. The player can hire them by walking into the halo next to them, but at the cost of $2000.

In certain missions, the player is provided backup at the beginning to help them complete the mission. Lance Vance is commonly used as backup to the player in the game; he backs up the player on five occasions (Guardian Angels, Supply & Demand, Death Row (to a minor extent), Rub Out and Cop Land). In the mission Bar Brawl, Tommy Vercetti is given two Vercetti Gang members (one of them is called Mike) to help him.

To recruit Grove Street members in Grand Theft Auto: San Andreas, you must aim a gun at them and then press up on the D-pad on Xbox or up on the Directional Buttons on the PlayStation 2. They will kill rival gang members and kill anyone you attack.They carry a pistol or a TEC-9.If the player chooses to find all the Gang Tags all backup will instead carry a MP5 or a Desert Eagle. They will also attack cops if they are chasing you. Its possible to activate a cheat to recruit anyone (including rival gangs) to join you. For example, if you recruit some Ballas, they will attack Grove Street and Varrios Los Aztecas members. A rare glitch affects this cheat were if you recruit these gangs they will attack their own gang.

The only way to get backup is to get Dwayne's relationship to 75% or higher. Once that is achieved, he will send backup on request. 2 gang members come, and will assist you.One will always carry a Micro Uzi and the other will always carry a pistol. The gang members will only attack others if they attack first or if you attack them first, and will also attack cops, but only if they attack you. Niko's two backup men have very high health being able to take ten Combat Shotgun blasts at point blank range before dying. They can be extremely useful in drawing fire away from targets that need to survive, such as Packie in Waste Not Want Knots, or in missions where Niko is outgunned. The service is disabled in some missions, however, such as Three Leaf Clover.

When doing a Gang War Johnny Klebitz gets six gang members who help in the war. Two of these members are always Terry Thorpe and Clay Simons. The other four random members can have their 'toughness' go up by doing gang wars and surviving. It is not mandatory that any of Johnny's backup actually survive these battles; Terry and Clay cannot be killed (even if they are shown to be incapacitated) and the others are simply cannon fodder, though there are benefits to concluding gang war battles before everyone is killed. With increased 'toughness' the members get increased health and get better accuracy.

From early in the game, Johnny also gets the to call Terry and Clay as backup (calling either will summon both). By doing wars, friend activities, and just by surviving random gun fights Terry and Clay's 'toughness' will go up upgrading their health, accuracy, fire rate, and their weapon. Terry's weapons are the SMG, the AK-47,and finally the Carbine Rifle. Clay's weapons are the Pump Action Shotgun, the Combat Shotgun, and finally the Assault Shotgun.

Unlike GTA IV or earlier games where summoned backup generally provides little more than distracting police and enemy targets away from the player, in several TLAD missions summoning Terry and Clay can substantially alter the mission, as scripted events occur when they are present. For example, in Bad Standing summoning backup forces Johnny to attack Brian's safehouse in a certain way, and also makes it more difficult to execute Brian, and in Was It Worth It? the backup will automatically set up an ambush, reducing the number of targets Johnny has to defend against.

When doing Drug Wars Luis Fernando Lopez is accompanied by Armando Torres and Henrique Bardas.The more Drug Wars the player does the better their backup's weapons get.Eventually Armando and Henrique will carry an M249 and a Gold SMG.Tony Prince also serves as backup in the mission Party's Over with a Pistol .44 but mostly he only does blind firing.