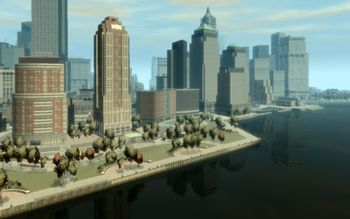 Castle Garden City, situated on the southwest end of Algonquin, faces the mouth of the West River.

Castle Garden City is an upscale waterfront neighborhood, with many towering office buildings and high-rise apartments. The neighborhood can be separated into two sub-areas: a business district, centered around Castle Drive, and a residential marina, south of Castle Drive.

As with many of Algonquin's other waterfront neighborhoods, Castle Garden City contains piers, but are primarily concentrated in the district's marina on the southern end. The district is also directly in view of Happiness Island.

Making the Battery Park City connection even more obvious is the presence of what appears to an imitation of the World Financial Center (as the WTF Center, complete with a replica of the famous Winter Garden as well as the New York Mercantile Exchange) along the residential drive that branches off Castle Drive. Other sources of influence from Battery Park City include the lookalikes of Liberty Court, The Solaire and Millennium Point in Castle Garden City, as well as facade elements derived from Conrad New York, South Cove Plaza and Gateway Plaza.

The neighborhood is served by the Liberty City Subway system. The Feldspar station, which is actually located along Union Drive West, between Frankfort Avenue and Emerald Street (and not Feldspar Street, as the name would leave you to believe) is served at all times by the Algonquin Outer Line.