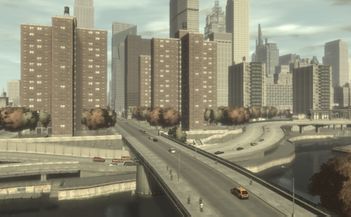 Presidents City, as seen to the northeast from the Colony Island end of Leaper's Bridge.

Presidents City is a neighborhood in east Algonquin by the Humboldt River, bordering Lancet to the north by Jade Street, Easton to the west by Albany Avenue, and Lower Easton and Fishmarket North to the south by Garnet Street.

Presidents City is predominantly represented by four blocks of co-op apartments (known as the Governor Greg R. Smith Houses) in addition to a pair of identical apartment towers and an Alphabet Brotherhood Center (ABC), whose purpose is unknown, both to the north.

Its proximity with Lower Easton, the Alphabet Brotherhood Center, and location relative to its real-life counterpart in Manhattan, New York City, suggests the area is based on Alphabet City. The prevalence of co-op buildings suggests the district's design is predominantly based on co-op apartment areas between Kips Bay and the Lower East Side, on the east side of Manhattan.

Colony Island directly links to Presidents City via Leaper's Bridge (at Hematite St.-President Ave.). Union Drive East, which runs along much of east Algonquin, links to the northern fringe of Presidents City at Garnet St. In addition, Presidents City has no direct connection to any subway line, the nearest station located in Easton (Easton LTA).

Retrieved from ‘https://www.grandtheftwiki.com/index.php?title=Presidents_City&oldid=357418’
Category:
Cookies help us deliver our services. By using our services, you agree to our use of cookies.