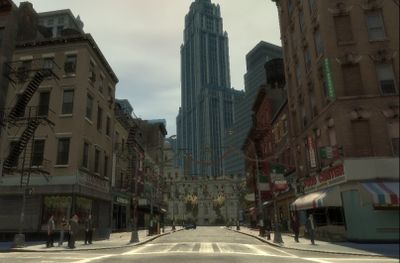 Feldspar Street (across) in Little Italy, viewed to the south with City Hall in the background.

Little Italy is an area in southern Algonquin, Liberty City, in Grand Theft Auto IV. It is the smallest area in the game. It is bordered to the north by Feldspar Street (Suffolk); to the south by Emerald Street (Chinatown); to the east by Columbus Avenue (Lower Easton) and to the west by Liberty Lane (City Hall). These borders make Little Italy the smallest neighborhood in all of Liberty City and Grand Theft Auto IV in general.

Little Italy, being an Italian enclave, has a heavy presence of the The Commission. It gives the impression of being an "old-world" neighborhood with its cobbled, narrow streets. As with many of the older, old immigrant-heavy neighborhoods in the city, the neighborhood features a number of pre-war style tenements, with many alleyways intersecting the short city blocks. Most of the neighborhood's aforementioned restaurants are clustered along Brown Place, whereas Denver Avenue serves as the main commercial strip.

As Little Italy is the smallest neighbourhood in GTA IV, Little Italy does not have many places of interest of its own. Drusilla's, an Italian restaurant, is located near the intersection of Feldspar Street and Denver Avenue. Kiki Jenkins, one of the women Niko is able to date, owns an apartment on Feldspar Street between Brown Place and Denver Avenue. Finally, in Grand Theft Auto: Chinatown Wars, the leader of the Triads, Hsin Jaoming, owns a penthouse in the neighborhood. Despite not having many places of interest, Little Italy is close to many attractions in other neighborhoods, such as the Rotterdam Tower in The Triangle and the Civic Citadel in City Hall.

Little Italy is a direct copy of Manhattan's Little Italy neighborhood. Everything about the GTA IV neighborhood (obviously its name, its size, its cobbled streets, the heavily Italian presence, its architecture) is reminiscent of the actual neighborhood.

While Little Italy is not directly served by the Liberty City Subway, there are two stations within proximity of the neighborhood. The Suffolk station on the K/C Algonquin Inner Line is located on Garnet Street between Back Passage and Ersatz Row in its namesake neighborhood; the station is underneath the Rotterdam Tower and as such, is a popular stop for tourists wishing to visit it. The Feldspar station on the Algonquin Outer Line is located at the intersection of Emerald Street, Frankfort Aveue, and Union Drive West, at the borders of Castle Garden City, City Hall, and Suffolk. 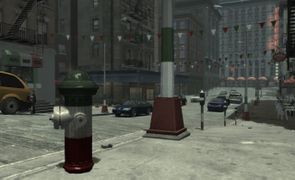 Italian-themed street furniture in Little Italy, GTA IV.
Retrieved from ‘https://www.grandtheftwiki.com/index.php?title=Little_Italy&oldid=378096’
Category:
Cookies help us deliver our services. By using our services, you agree to our use of cookies.