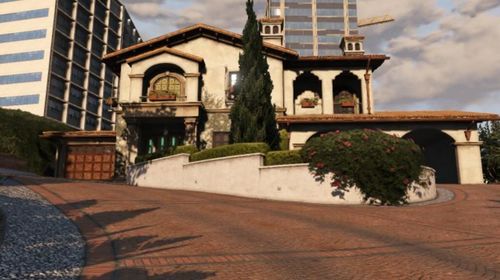 The De Santa House is a mansion owned by Amanda and Michael De Santa on Portola Dr in Rockford Hills, Los Santos appearing in Grand Theft Auto V and Grand Theft Auto Online. Amanda and Michael's children, Jimmy and Tracey, also live at the house, which also acts as a safehouse. The house allows Michael to watch television, drink alcohol, smoke marijuana, practice yoga and play tennis against Amanda, with Trevor Philips also able to play tennis against Amanda at the house's tennis court. Michael's family members can be found inside the house when not on a mission along with housemaid Eva and groundsman Carlos. The house also has a garage, which can hold two cars.

The De Santa family moved into the house at some point after 2006 with Amanda and Michael becoming friendly with their neighbours Hayden and Kimberly Dubose. The family, however, begins to fall apart with Amanda having extra-marital affairs inside the house with a number of men hired to help around the house including tennis coach Kyle Chavis and possibly yoga instructor Fabien LaRouche. In 2012 the house is rented to Blake and Freddy Slade who shoot pornographic films in the house. In 2013, Jimmy decides to purchase a yellow BeeJay XL from Premium Deluxe Motorsport but falls behind on payments leading to Simeon Yetarian, the dealerships owner, to send Franklin Clinton to break into the house to repossess the vehicle. Michael, however, forces Franklin to drive into the dealership at gun point resulting in Franklin losing his job and later returning to the house to meet Michael. The two begin working together after being confronted by Mexican kingpin Martin Madrazo at the house after they had pulled down a house owned by Martin.

The house also serves as the location for Michael to meet old friend and accomplice Trevor Philips for the first time since 2004 with the two working together after stopping Tracey from auditioning for Fame or Shame. Michael later performs yoga with Amanda and Fabien before driving Jimmy to Burger Shot where he is drugged and robbed by Jimmy. Amanda, not realising Jimmy was behind the events, moves the rest of the family out with Michael seemingly firing Eva and Carlos, the housemaid and groundsman, leading to the house becoming messy. The family later returns after agreeing to give family life another try with Eva and Carlos being rehired. The family, however, briefly move out once more after a group of mercenaries, sent by Devin Weston, hold Amanda and Tracey hostage with Michael returning to the house to save his family.

Retrieved from ‘https://www.grandtheftwiki.com/index.php?title=De_Santa_House&oldid=409170’
Categories:
Cookies help us deliver our services. By using our services, you agree to our use of cookies.