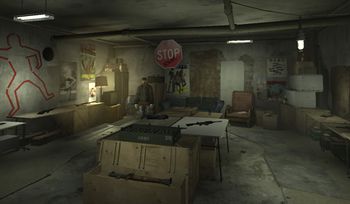 Interior of the illegal gun shop in Broker in GTA IV, also used as the Alderney outlet's interior.

A crackdown spearheaded by Liberty City mayor Julio Ochoa against firearm ownership in Liberty City and its surroundings has led to closure of legalized gun shops. As a result, illegal weapon dealers are the only source for purchasable weapons in GTA IV and its episodes. Given their covert nature, illegal gun shops are often far less visible than Ammu-Nation stores, usually having nondescript frontages and are only easily located by gun icons on the city map (or in the case of physical maps, scribbled markers). 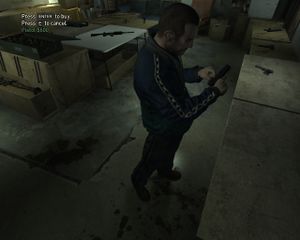 "Examining" a weapon at an illegal gun shop in GTA IV. Selection of a new weapon will prompt the player character to enter an animation cycle where he will "examine" the weapon until the player purchases the weapon or cancels their selection.

Much like Ammu-Nation, the player must enter the gun shop before they can select and buy weapons. Different weapons are laid out all over the interior of the gun shop, requiring the player walk to a specific point to select a specific weapon; players will only be able to purchase a weapon when they have selected it, and if the player already has the same weapon in hand, the player can only purchase additional ammunition for smaller sums of cash; newly purchased weapons start out with only a single set of rounds. Players can find and access these gun shops at any point of the game, but in the case of GTA IV, most weapons are simply "Display Models" until the player completes specific missions in the game; episodic packs however make all of them except the RPG available from the start.

The gun shops present other weakness when compared with gun cars; prices of weapons from the gun shops are charged in full, whereas gun cars offer discounts - and gun cars are far more mobile as they can be dispatched to the closest point to the player. In addition, the gun shops in the episodic packs do not offer any exclusive weapons otherwise available from gun cars.

Like gun cars, players will have no access to gun shops when they have a wanted level of one star or above.

There are a total of three illegal gun shops in Liberty City, each located in three major segments of the city:

Retrieved from ‘https://www.grandtheftwiki.com/index.php?title=Illegal_Gun_Shop&oldid=387643’
Categories:
Cookies help us deliver our services. By using our services, you agree to our use of cookies.