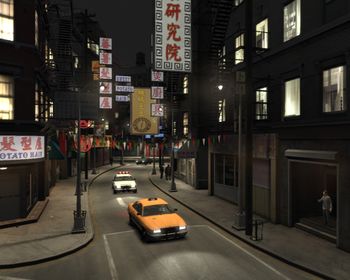 Cavity Lane, at it's terminus at Wong Way, Chinatown.

Cavity Lane is a small alley located the neighborhood Chinatown in lower Algonquin in the Grand Theft Auto IV rendition of Liberty City.

Cavity Lane is a one way street, on some occasions heavy traffic may occur on this alley. This alley has its own unique style of street lighting, that similar to Chinese architecture. Cavity Lane begins on Bismarck Avenue, with its terminus highlighting Wong Way.

An illegal firearm store is located on Bismarck Avenue on the eastern end off the alley.

Retrieved from ‘https://www.grandtheftwiki.com/index.php?title=Cavity_Lane&oldid=356272’
Categories:
Cookies help us deliver our services. By using our services, you agree to our use of cookies.