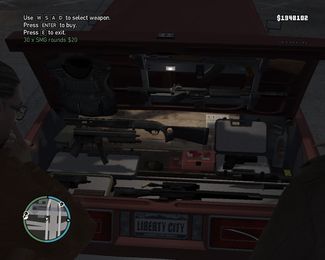 Selecting a weapon for purchase from Little Jacob's gun car in GTA IV.

A gun car is a feature in Grand Theft Auto IV and its episodic packs, The Lost and Damned and The Ballad of Gay Tony, that allows the player to purchase weapons and body armor from the back of a road vehicle in an isolated location in the city. The feature complements unnamed gun dealers dotted throughout the city (which is an easier-to-access but more expensive option), and is intertwined with the games' friendship system.

The gun car is referred to as a "gun van" in The Lost and Damned and The Ballad of Gay Tony due to the choice of vehicles used.

Access to gun cars are possible to the player as soon as they are granted the ability to organize outings with a friend who specializes in selling weapons. Depending on the conditions set by the games (see list of gun cars for further information), the player will unlock the ability to request for a gun car via their mobile phone; they are notified of this via a phone call from the aforementioned friend, informing that they can now call for weapons.

Once unlocked, a gun car can be called in by selecting the friend's name on the mobile phone's Phonebook, followed by "Guns" (GTA IV) or "Gun Van" (The Lost and Damned and The Ballad of Gay Tony). The player character verbally requests for the gun car, and the friend responds by notifying where they will be waiting for the player. The game then marks the location of the gun car on the map, to which point the player may proceed to the gun car. It should be noted that the friend will only wait for the player for several in-game hours before they decide to leave; there is however no penalty imposed on their friendship for this. Often times, the meetup point is located in an isolated location such as an alleyway or vacant land, illustrating the covert nature of the business. If the player has one-star wanted level or more (including the cooldown period), the gun dealer will immediately cancel the meeting when the player meets them on foot, citing security concerns.

Upon arrival at the gun car, the player may interact with the friend in order to access the selection of items available for purchase. Much like regular gun shops, the player must pay more for a replacement firearm, but pay less if they simply wish to buy additional ammunition for a firearm in hand; however, purchases from gun cars have the added benefit of being generally cheaper than those from gun shops (typically 30-50% cheaper, although the price of certain items are unchanged), serving as a more practical method of weapon purchases. The range of items on offer will also be expanded only after the player progresses in the storyline, preventing the player from acquiring overpowered firepower early in the game.

Once the player completes their purchase, the friend leaves with their gun car. In most circumstances, calling the friend a second time too soon afterward results in the service being denied. This includes completing a mission in-between calls; usually, taking part in at least two activities, or waiting a number of hours, allows the service to be reactivated.

The option to unlock GTA IV's gun car is available after the player is able to organize outings with Little Jacob following completion of "Shadow". Once the player manages to maintain their friend's liking towards the player at over 75%, the player can instruct Little Jacob and his red-and-black Virgo gun car to spawn at a meetup point; possible locations based on where Niko calls from can include behind Roman's taxi garage in Hove Beach and a parking lot on Charge Island, among other sites.

As a result of a simplified friendship system, the player is immediately granted the ability to call for a gun van in The Lost and Damned, specifically for Terry Thorpe's black Slamvan, following "Clean and Serene", regardless of the condition of the player's relationship with Thorpe. Note that several weapons offered for sale are available for free, with full ammo, from Jim Fitzgerald as long as he is available as a friend, and all items in Terry's van are available for free at the start of the final mission "Get Lost".

Accessibility of The Ballad of Gay Tony's gun car is similar to that in The Lost and Damned due to an inherently similar friendship system. The player is able to access the game's gun van, which appears in the form of Armando Torres's black Cavalcade, following "I Luv LC".

Retrieved from ‘https://www.grandtheftwiki.com/index.php?title=Gun_Car&oldid=378280’
Categories:
Cookies help us deliver our services. By using our services, you agree to our use of cookies.