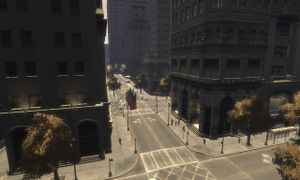 Barium Street is a seven block street in Downtown, Algonquin, Liberty City. Barium Street travels through Fishmarket South, The Exchange and City Hall in a strictly East - West direction, however both directions of travel are allowed between Flatfish Plaice and Privateer Road.

The street begins on the intersection of Flatfish Plaice in the Fishmarket South district, just to the south-west of Pier 45 and adjacent to the bus lane and Higgins Helitours. The street then travels west, passing under Union Drive East and intersecting with Privateer Road. From this point on travel is strictly one way. The road veers slightly left to align with the grid system and then enters The Exchange district as it intersects with Borlock Road. The street is now in the financial district and thus the scenery is far more dense with corporation HQ skyscrapers and business people. The street continues, intersecting with Albany Ave, Bismarck Ave, Amsterdam Lane and Columbus Avenue before entering the City Hall district where the street stretches its final block, terminating at Denver Ave.

The street contains no specific services or storyline functions.

Retrieved from ‘https://www.grandtheftwiki.com/index.php?title=Barium_Street&oldid=324117’
Categories:
Cookies help us deliver our services. By using our services, you agree to our use of cookies.