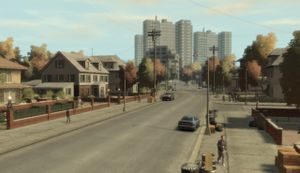 Shinnecock Ave is a fairly short in avenue Beachgate, Broker. It starts off Crockett Ave, with a LCPD building with a barriers and a booth, heads south, makes a left and right turns, and heads south again, creating two T-junctions with Ketchum and Claiborne Streets, and finally ending just before the shoreline, as a road barrier shows this. The avenue is home to the higher class of Liberty City, as manisons and luxurious cars litter all three streets but still has a feeling of its neighbouring districts, as a low rise apartment block is seen to the north.

Shinnecock appears all of Faustin's mission, as his mansion is on the avenue. A Turismo always appears in his driveway, even after his death.

Retrieved from ‘https://www.grandtheftwiki.com/index.php?title=Shinnecock_Avenue&oldid=375648’
Categories:
Cookies help us deliver our services. By using our services, you agree to our use of cookies.