This article is about the scooter. For the mission associated with it, see Pizza Boy (mission).

The Pizza Boy is a delivery scooter based on the Faggio, and, as its name suggests, is intended for pizza delivery, mainly with Well Stacked Pizza in GTA Vice City and GTA San Andreas, and Joe's Pizza in Staunton Island in GTA Liberty City Stories.

The Pizza Boy is distinct from the Faggio for various reasons. The bike features unique liveries; in GTA Vice City and GTA San Andreas, the vehicle bears a red and yellow paintwork in relation to Well Stacked Pizza; in GTA Liberty City Stories, it is painted green and white livery in relation to Joe's Pizza. In addition, the scooter is equipped with a top box for cargo. The GTA Liberty City Stories rendition is given a slight facelift to appear slightly more modernized (complete with a flat rear light cluster).

Aside its outward appearance, the Pizza Boy's performance is otherwise identical to the Faggio, expect it is capable of seating only one rider as the top box has taken up the rear seating.

Use in side missions

The Pizza Boy is adopted for use in side missions, specifically, "Pizza Boy" missions, where the player delivers pizzas to customers scattered around the pizza parlor. The mission is not available in GTA San Andreas, but courier missions with roughly the same concept as "Pizza Boy" exist.

Pizza Boys are not commonly seen on the streets, either only appearing parked in specific locations in GTA Vice City and GTA Liberty City Stories, or rarely being seen driven by Well Stacked Pizza delivery boys in GTA San Andreas; the Pizzaboy is not found parked anywhere in GTA San Andreas. 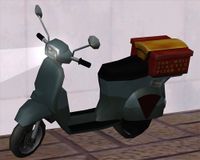 Retrieved from ‘https://www.grandtheftwiki.com/index.php?title=Pizza_Boy&oldid=373673’
Categories:
Cookies help us deliver our services. By using our services, you agree to our use of cookies.